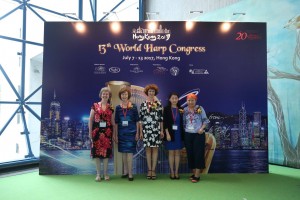 What could be better than one harpist? —nine-hundred and fifty-seven harpists! Of all ages and backgrounds, they descended upon Hong Kong in July, to attend this years’ thirteenth World Harp Congress—the first time the congress has been held in Asia. The limelight was upon the excellence of harp playing in Asia.

I had a chance to catch up with my colleague and friend Kathy Kienzle, principal harp of the Minnesota Orchestra for 23 seasons, esteemed teacher, and performer, and currently chairman of the board of the World Harp Congress.

Tell us about the World Harp Congress and your role with the organization.

The World Harp Congress is non-profit organization. Our mandate is to promote the exchange of ideas, stimulate contact between composers and performers of harp music, and to encourage the composition of new works for the harp. We have a special focus on the education of young harpists and we keep everyone in touch with a world-wide directory and bi-annual review. Our members represent twenty nations and I run the meetings.

Can you tell us about the history of the organization?

It was founded in 1981. Before that time festivals were held in the Netherlands, organized by the great Russian harpist Maria Korchinska, also one of the leading harpists in the UK. The history goes back to Edvard von Beinham, the Dutch conductor of the Concertgebouw from 1945-1959. After Beinham passed away a foundation was formed to help support the festivals and chamber music. His 18th century mansion in the Netherlands became the location for Korchinska’s “harp weeks”. Young harpists came from all over the world to play for the most well-known harp teachers and performers. They all lived together in the mansion. Not only would the younger players receive verbal feedback, but it was an ideal setting for the exchange of ideas. It was she who eventually suggested an international organization and even today the focus is on youth. Each morning at the congress, young people are chosen to play and they are given evaluations.

Tell us about the other important activities of the organization.

We have several committees to address different areas of concern—a health and resources committee; a help and resources project, which supplies strings, music, accessories, and instruments to countries that cannot afford to buy them such as Cuba, Eastern Europe, South America, and we sponsor deserving young harpists who may not have the means to attend our congresses. Our international harp archives preserve the history of the harp. Our collection includes music, recordings, programs and memorabilia, correspondence and historical documents, and our new music committee reviews and solicits new harp works throughout the year. We don’t actually plan the congress gatherings. The host city does.

How often is the Congress held and how do you determine the host city. Why did you choose Hong Kong this year?

The congress is held every three years. We receive bids from harpists who have a host committee with an artistic director in place to organize the event from their end. In Vancouver in 2011, we decided to hold a congress in Asia. There has been an incredible surge of harp playing and making in China, and in all of Asia, and the event had never been held in Asia despite a huge influx of harp playing in Japan, Korea, Taiwan, and Singapore. China has hundreds of students playing the harp. Of the 957 attendees this year in Hong Kong, 230 harpists were from China.

What would you say have been the highlights of these events?

Well of course we have tons of concerts, sometimes three things are going on at one time. The evening concerts are more formal. Artists perform several harp concertos with the local orchestra, this year the Hong Kong Philharmonic. Two nights we usually feature premieres of newly written pieces with the composer in residence all week. The family of the founder of the world harp congress had a great interest in new music. They established a separate stipend to allow the composers chosen that year to attend the congress. This year, Paul Patterson, a British composer, had eight new works performed. 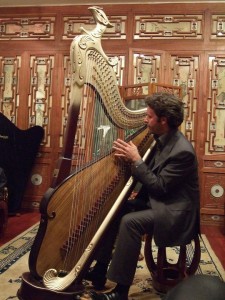 Jakez François is thrilled to try out a Konghou, one of his favorite harps.

Canadian composer Murray Schafer, with Canadian harpist Judy Loman, gave a joint master class in 2011. It was so much fun. There’s a humorous story behind their appearance. “When Judy approached me,” Schaeffer said, “I didn’t want to write a typical harp piece with all those glissandos that sound just like a toilet flushing!” Instead he wrote a marvelous piece entitled “Crown of Ariadne” for string quartet and harp. He wrote a duo concerto for harp and flute which was performed at another world congress.

Murray Schaefer: The Crown of Ariadne (version for harp and percussion) with Judy Loman
How do you manage the communication between so many attendees from all over the world?

Music of course is an universal language and these unusual and different performances inspire and stimulate everyone. Simultaneous translation is available through heads sets for the all-day workshops and lectures. In every country, we feature indigenous music. It was thrilling to hear the Chinese instrument, the Konghou—a pedal harp, with the same shape as a western harp but with strange looking pedals. The first concert seven professional Konghou players performed for 30 minutes without sheet-music! It was astonishing ensemble-playing. The instrument is plucked, so playing precisely together is exceedingly difficult. They created unique sounds by bending the strings, which one cannot do on a pedal harp. These new techniques extend the capabilities of the harp.

We also heard Park Stickney a phenomenal jazz harpist, Juilliard trained, who can play in any style. He performed with an ehru musician. They improvised using both Chinese and traditional jazz tunes. The grand finale was a huge group of tiny young players who with Konghou mounted on tables with wheels performed in a spinning choreography. Amazing.

Cardiff in 2020. In ancient times the position of Royal Harpist was associated with the Prince of Wales. The position has been reinstated by Prince Charles and the current royal harpist and students from the Royal college of Cardiff will organize the event. Our members are truly a family even though we are spread all over the world, and the level of harp playing just keeps rising.