We are so used to attending concerts in specially-designed large halls that it is easy to forget that until about 1850, most music was experienced in people’s homes, churches, small intimate venues or ‘salons’. The Salon Concert was particularly popular in the 19th century, a format which would have been entirely familiar to composers like Schubert, Schumann, Chopin and Liszt. The notion of a cultural or intellectual exchange within a small intimate setting developed in France in the 17th and 18th century, in part inspired by Horace’s statement that the purpose of poetry was “either to please or to educate” (“aut delectare aut prodesse est”). Cultural salons were places where people could gather to discuss literature, poetry, philosophy, theology, and ideas in a convivial and stimulating atmosphere, often with food and drink. The Salon became significant during the Age of Enlightenment and the French Revolution as a hub for lively political debate. It was also a place where women could enjoy a leading role and opportunities to air and “publish” their ideas. 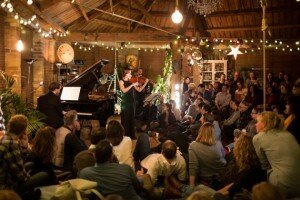 An informal salon concert at The Treehouse in Shoreditch, London

The French word “salon” literally means “large room” and suggested a spacious room where people might withdraw after a meal (the English term “Drawing Room” comes from “Withdrawing Room”). In keeping with the spirit of the 18th-century intellectual salon, the musical salon was a place where like-minded people could gather to enjoy performances, conversation, and refreshments. Because only grander houses possessed a salon or salons, these events were populated by the well-to-do, the rich, the nouveau riche and the bourgeoisie, an exclusive community of people who generally knew one another, or were connected by others in a similarly elite demographic. Performances in such salons were considered rather exclusive – an opportunity for both hosts and guests to demonstrate their wealth, education and cultural awareness – and for a salon to be truly successful, it had to operate as an “open house” on a set day each month, for example, with a regular roster of important guests and prestigious musicians who performed to a relatively small audience. Thus the Salon was a place for those who regarded themselves as the culturally elite and it quickly became an important vehicle for artistic patronage. Composer-pianists such as John Field and Frédéric Chopin both enjoyed the exclusivity and support of the Salon, and by performing their music in such a setting, it became synonymous with quality, high art and cultural elitism (in the best sense of the word). There were additional benefits too, for through these salons Chopin (and others) acquired fashionable pupils, often the daughters of wealthy salon attendees, and for the most part this was how he earned a regular income. 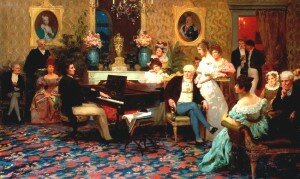 Chopin’s exquisite piano miniatures – his Nocturnes, Preludes, Impromptus, Mazurkas, Waltzes – were the perfect repertoire for the Salon, and a whole genre of “salon music” mostly for piano quickly developed in the 19th century. Notable composers include Liszt, Thalberg, Sindling, Chaminade, Moscheles, Paderewski, Satie, Gottschalk, Moszkowski, and Grainger. Displays of sparkling virtuosity and “paraphrases” or fantasies on opera themes were particularly popular, along with romantic or sentimental character pieces, often with beautiful lyrical melodies and flowing accompaniments, a “combination of sentiment and piano passage” (Robert Schumann). In fact, salons attracted excellent, often internationally-renowned musicians and composers, and audiences tended to be serious music lovers and connoisseurs rather than less well-educated dilettantes.

The music salon at the 1901 Arts Club, London

The salon concert is alive and well today in the form of relaxed “house concerts” or more formal events in small intimate venues such as the 1901 Arts Club in London. Those with suitably large homes are able to recreate the 19th-century musical salon in all its glory with specially invited guests, and enjoyment combined with philanthropic intent. The modern salon is particularly valuable to young artists, giving them the opportunity to perform to those who may further their career, including festival directors, concerts promoters and event artists’ agents. Afterwards, guests and musicians can mingle and socialise – an important aspect of the salon concert experience.

For musicians, the salon setting also provides a “dry run” of a programme in front of an invited audience before a performance at a more significant venue such as London’s Wigmore Hall. Above all, music performed in such a setting offers audiences and musicians a unique musical experience. It brings listeners and musicians closer and creates a special, intimate atmosphere in which to enjoy and share music.