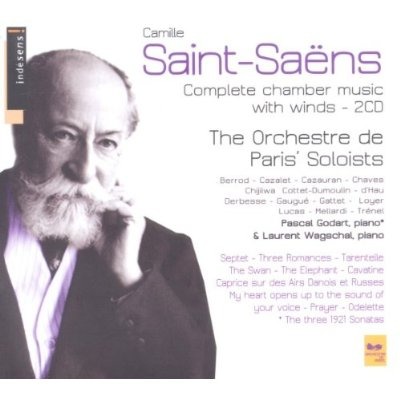 From Saint-Saëns: Complete Chamber Music with Winds (2010)
Released by Indesens

Tarentelle for Clarinet, flute and piano op.6
The Complete Chamber Music Works with Winds demonstrates that Saint-Saëns is the origin of the worldwide famous “French winds tradition”. In a century mostly inspired by German romantic orchestral pieces, Saint-Saëns considered the wind instruments on the same level as violin and piano. In the evening of his life, aged eighty-five, Saint-Saëns came back to wind sonatas. Although being very classical, the three 1921 sonatas announce the “Groupe des Six” neo-classicism, and particularly Poulenc. In that respect, even at the very end of his life, Saint-Saëns stands as an innovator.