Due to the current COVID-19 outbreak, the Philharmonie Berlin has been closed down till April to curb the spread of virus; yet the orchestra decided to give the concert conducted by Sir Simon Rattle as planned without real audience, with a programme of Berio’s Sinfonia and Bartók’s Concerto for Orchestra. The concert was broadcasted over the period of 12th-14th March on Digital Concert Hall and will be available till the end of March for free.

Berio’s Sinfonia was given an illuminating, lucid reading, particularly in the third movement which is certainly the highlight of this piece. The comical and chaotic quality of this gigantic musical collage was well captured; at times, I felt like floating on a “sea” of musical ideas intricately layered under the baton of Rattle. Berliner Philharmoniker and Neue Vocalsolisten Stuttgart, as expected, had virtuosity in their technical execution and, more importantly, craftsmanship in musical delivery, while the entire experience was further enhanced by the excellent camerawork.

I have to say that the remarks on Bartók’s Concerto for Orchestra by Sir Simon Rattle during the intermission and the interesting anecdotes (such as the relationship between penicillin and this composition) he mentioned made it probably more meaningful than a usual intermission, where the audience would be socialising, sipping their champagne, or queuing up for washrooms. 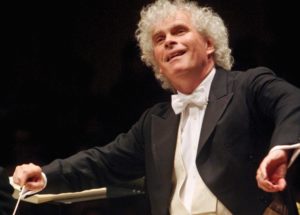 The Bartók piece was executed with great intensity and expressivity. The orchestra conjured up extreme desolation and excruciating pain in the first and third movements, while the humour and sarcasm in the second and fourth movements were equally effectively conveyed. Essentially, the light and shade in the music was fully explored and brought out. Notorious for its technical demand, the finale received vibrant, virtuosic treatment, where the musicians were clearly in the groove. I must admit – what an anti-climax it was to have no exclamations of “Bravo” or standing ovation after such an outstanding performance!

Up to this point, you may find it strange – why am I reviewing an online concert? Can this even be regarded as a concert review? This brings us to the following questions – can digital concerts replace “physical” concerts? How does live streaming technology impact classical music?

Without a doubt, had such technology not existed it would have been inconceivable for music lovers on different continents to enjoy the beautiful music they make in real time. With the advent of live streaming technology, the boundaries created by geographical distance, time and, in this case, the coronavirus are annihilated. Needless to say, it can save the costs of travelling and the often-expensive tickets (compared to a monthly subscription of Berlin Phil’s Digital Concert Hall, which costs €14.90 only), which certainly makes classical music more affordable and accessible than ever. In fact, some would prefer these digital concerts as they need not follow traditional concert etiquettes (or restrain themselves from coughing).

The advantages are so obvious that need no explanation. Meanwhile, can digital concerts (even those with real audience) fully replicate a real concert experience? The moment of anticipation as we are waiting for the performers to come onto the stage, being immersed in rapturous applause, giving standing ovation to show our appreciation for the artists – all of these cannot be truly “felt” if we are watching the concert remotely via a laptop or TV.

The setting of a physical concert also enables or forces us to concentrate on the music and get the most out of it. At home, there are all sorts of distractions that I don’t need to name, which potentially impede a thoroughly enjoyable concert experience. Taking it to the extreme, what’s the difference between watching digital concerts and watching a TV show? Though this may sound a little exaggerated, such technologies undeniably transform our way of consuming classical music, for better or worse.

Ichi-go ichi-e (“one time, one meeting”) is a Japanese concept that emphasises the appreciation of ephemeral and unrepeatable nature of any events or encounters in our life, which happened to influence Maestro Sergiu Celibidache’s music making as well. Celibidache focused on creating a “transcendental experience” in every concert, which he believed cannot be duplicated. This also explains why he was opposed to recordings. After all, can we really replicate or repeat something that is by nature unrepeatable with technology?

Well, this is by no means an attempt to play down the role of digital concerts and live streaming technology in promoting and expanding the audience of classical music. As a matter of fact, I enjoy the Digital Concert Hall a lot and I am extremely grateful for what’s offered. As we embrace digital streaming services, I would just like to invite you to re-think what concerts mean to you, and ultimately what music is about.

P.S. Just like what Sir Simon Rattle said in the introductory remarks, in crises like today’s, art and music are desperately needed to remind us of the beauty of the world. Indeed, what a generous move for Berlin Phil to make this free to the public!