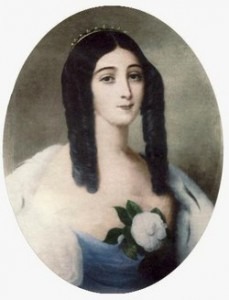 After Franz Liszt had successfully escaped the ravenous attention of Lola Montez in early autumn 1845, he hastily made his way to Paris. Performing in a variety of public and salon concerts, he apparently liked to spend his free time at the famous Théâtre de l’Ambigu-Comique (Theatre of the Comic-Ambiguity). Located on the boulevard Saint-Martin, the theatre offered a variety of melodramas, pièces de boulevard and vaudeville shows. During the intermission for one of the new plays, David-Ferdinand Koreff — a society doctor who was described as “half charlatan, half genius” — introduced Franz Liszt to his patient Marie Duplessis, one of the most famous and sought-after French courtesans of her time. Between September 1844 and August 1845, she had been the mistress of the legendary French writer Alexandre Dumas, who immortalized her in his novel “La Dame aux camellias” (The Lady of the Camellias), just as Guiseppe Verdi would subsequently do in his 1853 opera “La Traviata.” Dumas described her as “tall, very slim with long, black, lustrous hair, Japanese eyes, very quick and alert, with lips as red as cherries and the most beautiful teeth in the world.” The literary critic Jules Janin remembered “her young and supple waist, the beautiful oval of her face and the grace which radiated like an indescribable fragrance.” 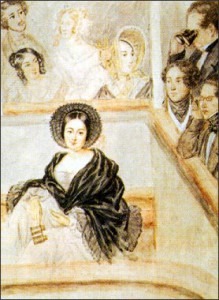 Marie, was born Rose Alphonsine Plessis in Normandy on 15 January 1824. Her grandmother was a prostitute and not surprisingly, her grandfather was a priest. Daddy was a ruffian and drunkard who early on sold her to a variety of men, with Marie losing her virginity at age 12. Radiantly beautiful she came to Paris at age 16, and quickly decided on a career as a courtesan. She soon became the mistress of a steady stream of incredibly wealthy French aristocrats, and by the time she reached her twentieth birthday, she was spending over a 100,000 francs a year on her upkeep, not including clothes, carriages, servants, rent and travel. She gambled excessively and thoroughly enjoyed all the comforts money can buy; yet somehow never lost her innocence. Liszt wrote that “for hers was a truly enchanting nature and practices generally thought to be corrupting — perhaps rightly so — never touched her soul.” By the time she met Franz Liszt, however, she was already seriously ill with consumption, the more polite name given to tuberculosis. None withstanding, Liszt described her as the “most absolute incarnation of Woman who has ever existed,” and for a period of about three months, the couple became almost inseparable. For unknown reasons, Marie traveled to England in February 1846 and married Count Edouard de Perrégaux. While the marriage was valid in England, it was not legal in France and the couple separated at once. She returned to Paris and to Liszt begging him to take her with him on his upcoming concert tour. “Take me, take me with you wherever you want. I will not be a burden to you. During the day I will sleep. In the evening I will go to the theater. At night you can do anything you want with me.” Before List departed Paris in the spring of 1846, he promised to return and take her to Constantinople, yet very predictably, he did not keep his promise. Marie was last publicly seen in January 1847 “the shadow of a woman, white and diaphanous,” and she passed away on 3 February 1847. It has been suggested that it was Dr. Koreff’s cure — copious amounts of strychnine — that actually killed her. She did not die in poverty, as some newspapers suggested, nor did she die alone as Count Perrégaux rushed to her bedside. Some sources report that Franz Liszt was “the only man Duplessis had ever loved.” Marie appears to have had a slightly different take on the subject as she confided in a friend “I have loved sincerely, but no one ever returned my love. That is the real horror of my life.” Liszt heard about her death while traveling through Poland in May 1847. He wrote, “This poor Mariette Duplessis has died. She was the first woman I fell in love with, and now, she has been laid to rest in an unknown cemetery, where worms will eat her body. I do not know what strange, mournful note vibrates in my heart at the memory of her. ” Franz was always able to express the most profound sentiments in his letters, preferably far away from the subjects of his pity; while worms were eating Marie’s body, Franz was busy nibbling on the Princess Carolyne von Sayn-Wittgenstein.