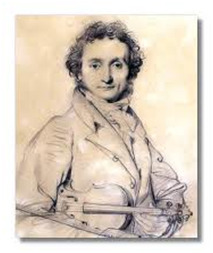 Niccolo Paganini (1782 –1840) was an Italian virtuoso violinist and composer who loved playing tricks during his performances. To impress his audience, he would sometimes tune one of his strings a semitone higher, and at other times he would play his entire piece on just one string (after breaking the rest). His near impossible finger and bowing technique left audiences astounded, while others observed him closely to discover how he performed his double stops, harmonics and pizzicato with both his left and right hand techniques mostly unheard of at his time.

Even today, many of Paganini’s compositions are still recognized as some of the most difficult music ever written – only a handful of violinists ever reach the heights of technique and musical capabilities required to master his work.

Soon, ‘the Devil’s son’ became Paganini’s second name, a title he gained from people who used it to describe the ‘possessed’ state he would enter during his performances. They believed that he had made a pact with the devil in order to attain his extraordinary talent.

However, behind Paganini’s devilish façade was a genetic disorder called Ehlers-Danlose syndrome, which is characterized by hyper-mobility of the joints due to defects in collagen synthesis. In the book Creativity and Diseases, Sandblom wrote that Paganini’s wrist was so loose that he could easily twist it in all directions, allowing him to double its reach and play the first three positions without shifting his hand at all.

Another outstanding physical feature was the long length of Paganini’s limbs and fingers. These traits lead us to believe that he also suffered from Marfan syndrome, a disorder of the connective tissues that support the bones, blood vessels, bones and other organs. The genetic disease interferes with the production of fibrillin, one of the important proteins found in connective tissues. Patients with the syndrome are hence often very tall, thin and loose jointed. They are also more likely to suffer from heart and blood vessel problems, such as a weak aorta or leaking heart valves. In severe cases they may also have problems with their bones, eyes, skin, nervous system and lungs.

Sergei Rachmaninov and others 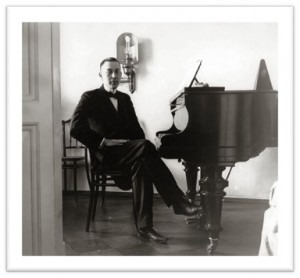 Another musician who took full advantage of his physical ailments was Russian composer, pianist, and conductor Sergei Rachmaninov (1873-1943). As a pianist, he was known for his crystal clear textures and flawless virtuoso piano technique. As a composer, his style echoed the late Romantic style akin to Tchaikovsky, although strong influences of Chopin and Liszt were apparent.

Physically, Rachmaninov could stretch his fingers the furthest across the keyboard compared to any other pianist. His large hands could cover thirteen keys, which meant a hand span of approximately twelve inches. This perhaps explained why many of his compositions and performances were known for its big chords and rhythmic drive.

Rachmaninov’s slender body, long limbs and prominent ears suggest that he may have suffered from Marfan syndrome as well. As a result, he suffered from arthritis, back pain, eye strain and bruising of the fingertips throughout his life. 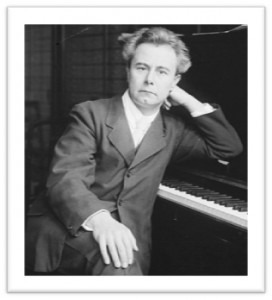 One may think that people inherently born with longer limbs and fingers surely have it better than the rest of us, at least musically-speaking. However, another musician, Josef Hoffman, is proof that musical talents come in all shapes and sizes. The Polish-American virtuoso pianist, composer, music teacher, and inventor had fairly small but strong hands.

Once, Josef Hofmann and Leopold Godowski were approached at a party by a guest, who remarked, “what small hands you have, Dr. Hofmann! And yours too, Mr. Godowski! How in the world, gentlemen, can you great artists play the piano so magnificently with such small hands?” The reply was, “Where in the world did you get the idea that we play the piano with our hands, madam?“