Boris Giltburg reflects on the process of playing and recording Bach’s Three-Part Inventions alone, at home. Plus, enjoy the full video of the performances… 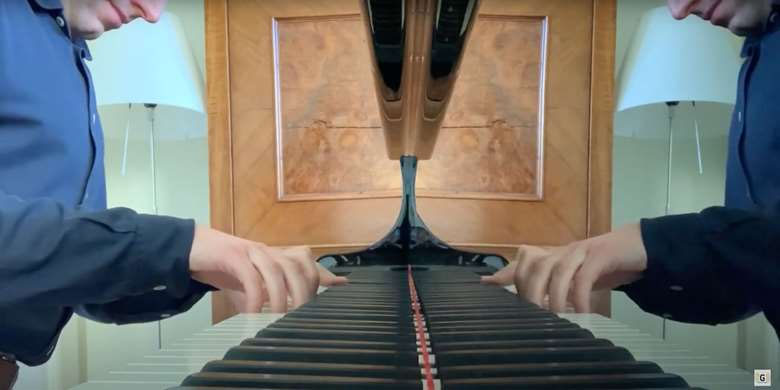 This was supposed to be a fun project. Honestly. There was something exciting, even romantic in the idea of going into isolation for an unknown period of time (never mind everybody was already isolating for an unknown period of time), disconnecting from the outer world, switching off the phone (hmm, maybe), sitting at the piano from dawn till dusk, and slowly, step by step, without any time pressure (!) producing a recording.

I really wished I were a writer. Or a painter. Then it would have been even more romantic – I could have produced a book. Or a painting. But a recording is not bad either for a lockdown project, I thought; and I started looking for a suitable repertoire challenge. At first I thought Debussy, then Chopin, and finally – Bach.

Bach is the biggest dichotomy of my life. There isn’t another composer to whom I listen more, but whose music I play less. I know large chunks of the Magnificat by heart (various voices); as a teenager I used to karaoke the Motets and Passions in my room until my parents came pleading for mercy; I avidly collected the Cantatas cycle with JE Gardiner from the very first volume, and the B minor Mass is firmly in my list of Top Ten Pieces Ever.

All vocal stuff. On the keyboard front, I tremendously love the organ works, and have greedily and unashamedly played every piece which Busoni and Liszt had arranged for piano. The grandeur, more Gothic than Baroque in architecture; the gloriously thick textures; the magnificent colours afforded by imagining organ registrations all appealed immensely, to say nothing of the wonderfully narrative fugue themes. The D minor Chaconne (by the famous composer Bach-Busoni!) is another great love … one of those rare, endlessly deep masterpieces that encapsulate an entire human life.

But I barely played any ‘pure’ Bach – his original keyboard works – and probably none at all on stage in the last 15 years. I kept dreaming about it, as it’s impossible to be so addicted to a composer and not want to play his music; and somehow, turning to Bach now, in these unsettling, difficult, troubled, challenging, crazy times, felt right.

Which repertoire? I read through the English and French Suites, the Partitas, the Art of the Fugue and parts of the Well-Tempered Clavier, only to realise the lockdown would be long over before I’d be able to do any of it justice. Then I recalled that as a kid I had played the Three-Part Inventions. I played through them again and was amazed at the richness, variety and beauty of the music. They were like a genre unto themselves, short but complete, deliciously complex, a series of absolute gems. I worked on the cycle between live-streams of other repertoire. I thought it would take me two weeks to get them ready; it took over a month.

Equipment-wise, I had one microphone, two phones, and several cameras. I asked for advice from a good audio engineer friend, and with help of a Skype video call, we found the best spot to get a respectable sound from a carpeted living room. In terms of video, after trying various fancy arrangements, I saw Angela Hewitt’s tweet saying in these days the focus should be on the hands, not the face. This very much struck a chord – especially for this music – so I put a phone on the side of the piano, and that was it.

The sessions, without a producer to interact with, and what’s worse, without a time limit, gradually expanded from two to three, to four, then to five days. The only way to stop was to tell myself that the next take would be the last. Okay, three more. Well, one absolute last. I had a growing pile of scribbled notes, with time-codes followed by pluses, minuses, question and exclamation marks – reminders of playback impressions. After the fifth day I listened to everything, compiled a shortlist, and … brought out the mic and tripod again, as I thought I could do a few of the slow Inventions better. Listening to those extra takes I realised I had Bach-overload and couldn’t judge anything anymore. So I finally stopped.

The compilation took a few tries (and days) as I reshuffled combinations of takes. It was relatively easy to decide on the fast, ebullient Inventions, but the slow ones – longer, tonally more complex – took a while. The only one where I had no doubt was No 9; the crux of the cycle from any point of view, with chromaticism so wild it sounds unbelievably audacious even to our 21st-century ears. I got it from the second attempt; saw that I had forgotten to turn on the camera; listened to the take and decided I didn’t care. This was how I dreamed to be able to play Bach.

And then the video was ready, and I had this strange feeling of sadness, emptiness and relief. Would I do this again? Totally. It gave my days focus and meaning in a very difficult time. Only … maybe not right away.

This article first appeared on the Gramophone on 27th May 2020.