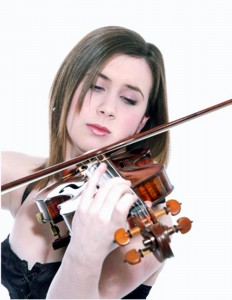 We have all seen children forced to endure endless piano and violin lessons by overbearing and pushy parents. Research has suggested, “Pushy parents who go to great lengths to make their children succeed are attempting to make up for their own failed dreams.” But when it comes to genius musical prodigies, it’s sometimes hard to tell who is pushing whom! Chloë Hanslip started to pick out melodies on the piano at 2, but since her parents did not want another pianist in the house—her sister Virginia was training as a pianist at the Royal Academy of Music—they decided to start her on the violin. When Chloë heard Mozart’s “Kleine Nachtmusik” on the radio, “she picked up the violin and started to play the music. First public appearances soon followed, and when she performed for Yehudi Menuhin at age 5, the great violinist and educator said, “Rarely have I seen such an inner serenity, sense of space and poise.” Menuhin arranged lessons for her with Natascha Boyarskaya and eventually invited Chloë to study at his school. However, Chloë—now aged 7—rejected the offer and insisted to take lessons with violin guru Zakhar Bron, the teacher of Maxim Vengerov and Vadim Repin. “When I met Professor Bron, we just clicked straight away,” Chloë explained, “I knew I had to be wherever he was.” Her mother Averil confirms that it was 100 percent Chloë’s decision! To accommodate their daughter, the Hanslip family had to remortgage their house and plunder their savings because the itinerant Bron was teaching in Lübeck, Germany, at that time. 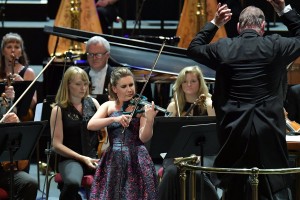 For two years, Chloë and her mother lived in a cramped little flat in Lübeck, and her father commuted on weekends. Chloë remembers, “My mother had retired from running her ballet school and was planning to grow old gracefully. Then she had me at 46, so that sort of went out of the window! My parents are both wonderful and they have devoted a lot of time to me.” Chloë attended the local school, but since exceptional talent is frequently subject to bullying, she was home-schooled from the age of 10. By that time, however, she was playing in major concert halls throughout Europe and North America.
She was also chosen to feature as the “infant prodigy violinist” in the film adaptation of Onegin, which starred Ralph Fiennes and Liv Tyler. “It was such fun,” she recalls, “they gave me 10 days to learn the cadenza from the Devil’s Trill sonata by Tartini, which is one of the hardest pieces in the repertoire. I remember being very disappointed, though, because I thought I was going to get lots of hair and make-up, and Martha Fiennes, the director, said, ‘Well, you’ve got the perfect Russian complexion, you don’t need any make-up.'”

Chloë Hanslip made international headlines when she was signed by Warner Classics at 13, and was lauded as the most brilliant player of her generation. Her debut album was released in September 2001 to great acclaim, and the second CD featured Bruch’s Concerti No. 1 and 3. “I’ve always been more mature than my years,” she says. “I don’t really see what a childhood is anyway. I’m very happy with my life. As long as you are happy, it doesn’t really matter whether you had a childhood.” Chloë always wanted to be a fully-fledged classical musician, “I wouldn’t be a crossover artist,” she insists. “I admire Vanessa-Mae for what she has done, but that’s not the way I want to go. I’m a straight classical artist. I think classical music should be played as the composer wrote it, not in some kind of arrangement with modern backing. I don’t think I ever want to go into pop-classical.” Although she was signed to record five discs for Warner Classics, the label fired her after only 2! While we are certainly aware of the Mafia-style tactics of the recording industry, it seems that inflated expectations led Chloë and her parents to become “increasingly assertive in their dealings with Warner Classics, and there came a point where corporate patience snapped.” Since then Hanslip has recorded a stunning CD with works by John Adams, John Corigliano and Franz Waxman. “The richness and clarity of her tone is beyond learning… this is the sort of performance that secures a reputation for life,” reports Gramophone. Hanslip now plays about 50 concerts a year and more than once was asked whether she had pushy parents? “No,” was her decided answer, “I was the pushy daughter.”