Features
The Joy of being a Musical Prodigy
Alma Elizabeth Deutscher
by Georg Predota September 24th, 2017 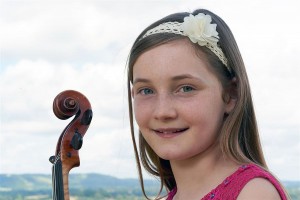 If you have been reading my miniseries on the shenanigans of abusive parents beating their children to musical stardom, this little story will probably restore your faith in humankind. I am talking about the pianist, violinist and composer Alma Elizabeth Deutscher, born in Oxford in 2005! She started playing the piano at age two and the violin at three. Her parents gave her a little toy violin, and within less than a year she was playing Handel sonatas. She improvised on the piano by age 4, and by five wrote down her compositions. Things progressed rapidly, and at age six she composed her first piano sonata, followed a year later by the short opera The Sweeper of Dreams. A violin concerto emerged at age 9, which she premiered in 2015. And not to be outdone, her first full-length opera Cinderella premiered in Vienna on 29 December 2016, conducted by Zubin Metha. Deutscher is the daughter of Janie Steen and the Israeli linguist Guy Deutscher, and according to her father, “the family was unprepared for the intense media exposure, but view it as their most important task to ensure that she has a happy childhood.”

To mere mortals it is almost inconceivable, but Alma’s compositions arrive “fully formed.” She once told a newspaper, “The music comes to me when I’m relaxing. I go and sit down on a seat or lie down. I like thinking about fairies a lot, and princesses, and beautiful dresses.” Alma explained, “When I try to write a melody it never comes to me.
It usually comes to me either when I’m resting or when I’m just sitting at the piano improvising, or when I’m skipping with my skipping rope. Or even when I’m trying to do something else, when somebody is talking to me or I’m trying to do something, then I hear this beautiful melody.” Her inspiration also comes from an imaginary country called Transylvanian. “I made up my own land,” she explains, “with its own language and there are beautiful composers there, named Antonin Yellowsink and Ashy and Shell and Flara.” However, the most difficult part of composing, according to Deutscher is to create larger and complex works from an initial melody. “Lots of people think that the difficult part of composing is to get the ideas, but actually that just comes to me. The difficult bit is then to sit down with that idea, to develop it, to combine it with other ideas in a coherent way. To sit down and develop and combine it, and afterwards to tweak it and to polish it – that takes ages…”

Alma Deutscher: Cinderella “When the day falls into darkness” 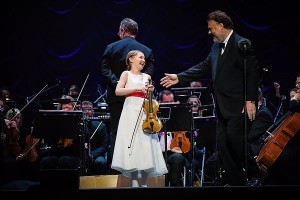 Music Critics have predictably been enthusiastic. “That a young girl could have the mental energy to compose a two-hour opera and take credit for its full orchestration is staggering; that the end result is a lively, coherent piece of comic opera is exceptional.” She certainly has a natural gift for melody and harmony, but she also knows “how to build scenes, keep them in tension, and orchestrate dense atmospheres.” Since much of the critical response centers on her age and status as a child prodigy, Deutscher said, “I want my music to be taken seriously, and sometimes it’s a little bit difficult for people to take me seriously because I’m just a little girl.” However, music professionals ranging from Simon Rattler, Zubin Mehta to Daniel Barenboim are unanimous that she is a genius, “and one of the greatest talents of today.” Musicologists have suggested, “Alma’s most important talent is the perfect connection between her inner world and the melodies she creates, which are so beautiful because they stem directly from this inner world. Few composers can write such tunes.” Deutscher was once asked if her beautiful melodies really belong in the 21st century, a time full of complexity and ugliness. “But I think that these people just got a little bit confused, explained Deutscher. “If the world is so ugly, then what’s the point of making it even uglier with ugly music?” Alma spends up to five hours a day composing, practicing and listening to music. She is homeschooled and far ahead of the typical 10-year old in terms of music. However, according to her father “she is having a more childish childhood than many children. If she were at school she would be more affected by social pressures, but here she can wander around and play with her skipping rope for two hours if she wants. She is allowed to be as much a child as she wants to be.”