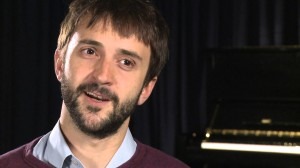 Matthew Kaner is one of a handful of young British composers who have passed through that country’s long list of development opportunities and begun to forge a distinctive musical voice. Like many composers of his generation you can hear idiomatic instrumental writing and finely wrought textures, perhaps inherited from composers like his teacher Julian Anderson. As well as influences from his home country it’s possible to detect influences from further afield; recent pieces cite the influence of the Danish composer Hans Abrahamsen and Frenchman Henri Dutilleux. But there’s also something personal in Kaner’s music – occasionally you can hear a darker, wilder energy which seems to be entirely personal.

Things are going well for Matthew – he’s written for many leading ensembles like the London Symphony Orchestra and London Sinfonietta, and has been appointed Professor at his alma mater the Guildhall School of Music and Drama. This autumn he’s the resident composer at BBC Radio 3 to celebrate the 70th anniversary of Radio 3’s predecessor the Third Programme, which will introduce his music to a major new audience.

I caught up with Matthew to find out a bit more about his work and to see how the scheme was going.

Could you briefly introduce yourself to our readers? How did you get into composition?

Of course! I’m a composer based in London and have been composing since my youth, but really got going seriously at university when I was on the undergraduate course at King’s College London. My earliest musical loves were Bach, Chopin, Ravel and lots of jazz, all of which still remain very important to me today.

You’re currently resident with BBC Radio 3 – can you describe the role? How has it been so far?

Yes, it’s a very exciting residency to celebrate BBC Radio 3’s 70th anniversary, run in partnership with Sound and Music. It started in the week of their birthday (29th September), and it lasts for 70 days, so I’m nearly mid-way through. The main feature is that I’m writing a new short piece to be aired on each of the 10 weeks of the residency on the station’s Breakfast show. The piece first goes out on the Monday and is then played again every week day, and so far there have been pieces for the Workers Union Ensemble, violinist Benjamin Baker, pianist Richard Uttley, and BBC New Generation Artist Ashely Riches with violist Sarah-Jane Bradley.

I’ve also featured on other Radio 3 programmes, and there will be a few other appearances across the network during the remaining 6 weeks.

It’s going brilliantly; my music has reached a huge new audience, and it’s been a real privilege to work with so many first-class musicians, some of whom I hadn’t even met before! 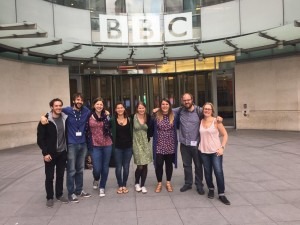 Yes, I’ve been very lucky to attend various fantastic schemes for young composers, and they’ve been invaluable to developing my work and career. The London Symphony Orchestra’s Panufnik scheme offers six young composers their first (or one of their first) opportunities to write for professional orchestra each year, and then commissions two to write a longer work that is then premiered in the main season at the Barbican Hall. Securing major commissions as a young composer can be very difficult indeed without these opportunities; it’s very difficult for ensembles and programmers to discover your work, but these schemes immediately raise your profile, and in some cases result in recordings or broadcasts that are then there to promote you and your music.

I certainly wouldn’t be where I am today without these opportunities and the wonderful support and encouragement of distinguished composers like Colin Matthews, Oliver Knussen and Wolfgang Rihm who’ve mentored me on these programmes.

What are your plans after the BBC Radio 3 residency?

I have an exciting commission for a new orchestral piece for the Lucerne Festival in early September 2016, which was played through in draft form this August. The Lucerne Festival Academy Orchestra and conductor Jeffrey Means, who will premiere the piece, are absolutely fantastic, and I’m really excited about hearing them perform the finished piece.

Further ahead I’m hoping that lots of exciting projects and commissions will keep coming my way, and that I’ll continue to grow and develop my work and reputation. Composing is a never-ending voyage of discovery – or at least that what I think it should be! The key is to keep challenging yourself; not knowing quite what you’ll do with the next piece is part of what makes it so rewarding.

What do you get up to when you aren’t composing?

I’m very fond of making things for the flat and garden; this summer I built a large raised deck outside and some bookshelves from scratch. My father is a furniture restorer and gave me the basic skills when I was growing up, and I seem to just enjoy making things: musical or otherwise! I also love walking and cycling in the English countryside – it’s a great way to wind down after an intense period of creative activity.

Matthew Kaner is currently the Embedded Composer in Residence at BBC Radio 3. There’s more about the scheme on their website, and you can find more information about Matthew, as well as more recordings and scores, at his website matthewkaner.com.