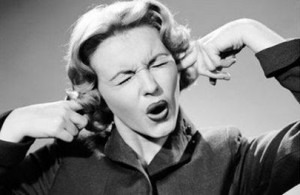 Extraordinary, isn’t it? It’s a classical concert, so presumably the audience are there because they want to hear classical music – and yet the bar is playing “bad pop” (and those two words cover a multitude of sins!).

Music, often bad music, is everywhere these days. We used to make jokes about “lift music” (or muzak) or “hotel lobby music”, but now it is inescapable. It’s in shops, bars, cafes, restaurants – the noise often blaring from the invisible speakers so loud as to preclude intelligent or intelligible conversation. It’s leaking tinnily out of other people’s headphones on the metro and bus. John Cage’s infamous 4’33” was written in part in response to all this “noise”, a comment on the “canned music” which seems to be everywhere. Most of this “canned music” is repetitive, musically simplistic (4 or 5 harmonies at most), and full of banal platitudes. But endure it we must, because it seems that some of us are afraid of silence.

Even the bank which I use on London’s High Street Kensington has been invaded by bad pop. Why do we need such “noise” in the bank? Do those that select this noise think it will enhance our “banking experience”? In most cases, it makes me want to run screaming onto the busy street. It is a relief, therefore, to enter High Street Kensington tube station, where classical music plays, as background music, just audible enough to identify Beethoven’s Fourth Piano Concerto or a Handel aria as I make my way down to the westbound platform.

Rage Over a Lost Penny – Beethoven/Brendel 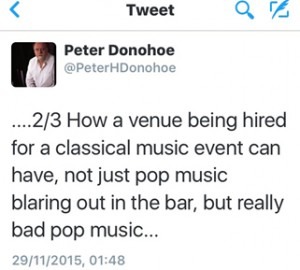 Most of the time I – and I suspect quite a few others – would happily go about my business uninterrupted by bad pop or “background music”. I don’t need a soundtrack to my transactions at the bank (though if one were to choose something appropriate, perhaps Beethoven’s ‘Rage Over a Lost Penny’?); I’d like to enter a pub or cafe and hear the sound of other people talking, laughing. Going clothes shopping needn’t be like entering a discotheque.

Don’t get me wrong: I love music, especially classical music, and most especially live classical music. I enjoy music in the right context and I’ll happily sit and listen to a radio broadcast, CD or live concert for several hours, uninterrupted, given half the chance. But out of context it can grate and intrude, especially when the music being played is someone else’s selection, a playlist made to someone else’s taste. Better in those circumstances to simply turn it off!

Pipe Down – the campaign for freedom from piped music