Artists Behind the scenes
Play it again Condi! Brahms, that is!
by Georg Predota February 2nd, 2015
Tags: Brahms 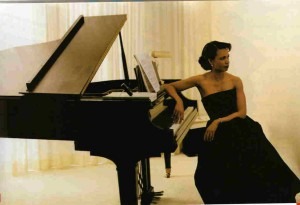 Do you still remember Condi Rice? Actually, that is Dr. Condoleezza Rice, and she was Secretary of State for the administration of George W. Bush. Night after night she stood in front of eager television cameras and lied about weapons of mass destructions and other such things demanded by the neurosis of the time. As we understand it now, Rice was also instrumental in securing the authorization to torture illegally detained individuals in order to extract intelligence information. Yet, believe it or not, there has always been a softer side to Dr. Rice. When she was an infant, her parents bought her a toy piano, and Rice started taking music, figure skating and ballet lessons at age three.
“I don’t remember learning to read music — you know, the lines and spaces and all that,” Ms. Rice said. “From my point of view I could always read music.” Classical music became her passion, and when her mother brought home a recording of Verdi’s Aida, “my little eyes were like saucers,” she said.

By age fifteen she was determined to become a concert pianist, and performed the Mozart D-minor concerto with the Denver Symphony Orchestra. Enrolling at the University of Denver, Rice intended to major in Music. She also attended the prestigious summer school at the Aspen Music Festival in Colorado and was suddenly exposed to a huge pool of highly gifted pianists. “I thought I was a very good pianist, but it was a real revelation to be surrounded by prodigies and realizing that I was never going to be able to play like that.” She began to doubt her career prospects as a pianist and veered towards a career in political science. However, she really never gave up music, and even during the busiest times of her career found the time to play chamber music with a group of dedicated amateur string players.

Dr. Rice is not the only secretary of state to pursue music. Thomas Jefferson, the first secretary of state was a violinist who apparently delighted in playing Baroque trio sonatas. Rice does not necessarily consider amateur music making a relaxing activity. “It’s not exactly relaxing if you are struggling to play Brahms,” she explained. “But it is transporting. When you’re playing there is only room for Brahms or Shostakovich. It’s the time I’m most away from myself, and I treasure it.” On occasion, the ensemble does venture into public view, performing at the British Embassy, for example. And Dr. Rice even played for the Queen of England! She has also performed with Aretha Franklin for a charity event. For Rice, Turandot is “about the only Puccini opera I can take,” and her favorite opera is the Mussorgsky epic Khovanshchina, a grizzly story of bloody infighting between Peter the Great and a fundamental religious group opposed to his reforms.

Apparently, Johannes Brahms is her favorite composer, because he is “passionate without being too sentimental. Before I leave this earth, I’m somehow going to learn the Brahms Second Piano Concerto,” she said,” which is the most beautiful piece of music.” It is also dauntingly hard.” When Yo-Yo Ma received a National Medal of the Arts in 2002, he requested that Dr. Rice accompany him during the ceremony at Constitution Hall. And thus they played the slow movement of the Brahms Violin Sonata in D-minor in an arrangement for cello and piano. Before Rice joined the Bush administration, she was a professor of political science at Stanford University, a post she has since returned to. So don’t expect any more incendiary public speeches—thank goodness for that—but it certainly bears looking out for a performance of Brahms’s Second Piano Concerto!