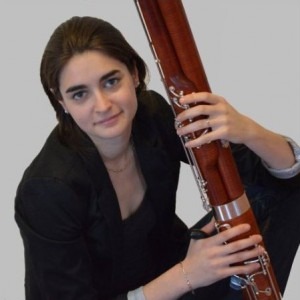 Sophie Dartigalongue personifies the fact that you shouldn’t judge a book by its cover. The bassoon often becomes the butt of many of the orchestra’s jokes, and the comical contrabassoon only sees a double serving of this teasing, but the contrabassoonist of the Berliner Philharmoniker is calm, collected, and – obviously – a master of her instrument.

Sophie began on the guitar, then moved to the bassoon after seeing it in action up-close. Her parents originally intended her brother to start the bassoon, but I’m assured there are no hard feelings.

‘We went to the conservatory with my brother to listen to the bassoon, because he wanted to start an instrument, I heard the bassoon and thought ‘I have to try it’’.

Originally from Versailles, near Paris, Sophie went on to study the bassoon at the Conservatoire National Supérieur de Musique de Lyon, and scooped first prize in competitions including the 2011 International Academic Oboe and Bassoon Competition in Łódź, and the 2010 Carl Maria von Weber International Bassoon and Clarinet Competition in Breslau.

Extant YouTube footage shows Sophie equally at home both in front of an orchestra and inside it. You can find her online performing concerti by Mozart and Vivaldi; the latter one of her favourite composers.

‘I enjoy playing baroque music a lot. I think it’s my favourite repertoire. The repertoire is so enormous, and it’s so well-written for the bassoon.’

As an orchestral player, Sophie won the position of contrabassoon in the Berlin Phil after studying in the orchestra’s intensely competitive Orchestra Academy.

‘I got a lot of experience in the Academy – in addition to solo lessons you got to play with the orchestra for eight weeks a year. 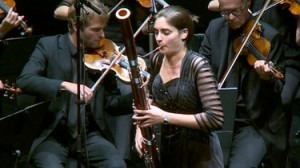 ‘It was the perfect bridge between studying and the profession. I made a lot of friends there, and still keep in touch with them now.’

Sophie’s calmness in person strikes me as a useful skill to have given her hectic touring schedule with the Berlin Phil. In her comparatively short time there (under two years), she has already been to London, Paris, Amsterdam, Japan, China, New York, Hungary, and Poland, among others.

‘When you’re travelling you often don’t have much time to explore – sometimes you get off the plane, go straight to a rehearsal, and play the concert. Other times, you have more chances to look around. We recently went to New York and were there for about ten days, and had a lot of time to see the city.

Sophie is one of the youngest members of the Berlin Phil – and so at just 23 years old, what does the future hold?

‘I don’t know what I’m going to do in the future – I’m just going to see what fun life brings!’