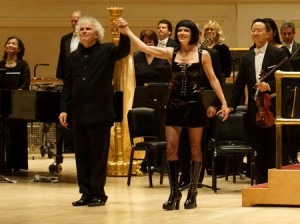 At a time when rumours of Sir Simon Rattle returning to the UK, no less to head the London Symphony Orchestra, were running thick and fast, it was no surprise that I found myself in a sold-out Barbican Hall, preparing myself for a whistlestop tour of some of the twentieth century’s most weird, wacky, and downright wonderful works.

If you weren’t listening carefully, you would have missed it: the concert opened with Webern’s incredibly delicate, glistening Six Pieces, a set of works clearly influenced by Webern’s early teacher, the infamous revolutionary Arnold Schoenberg. Perhaps most striking about this performance was the way the string colours metamorphosed so rapidly and vividly, melting away into the background as quickly as they’d sprung forth, the fluidity with which the timbres could change reflecting the larger scale decision to perform the six pieces quasi attacca, barely a moment’s pause before flowing into the following movement.

Canadian soprano Barbara Hannigan joined the orchestra next for three fragments from Berg’s opera Wozzeck. Despite the opera’s reputation for violent extremes and impassioned outbursts, much of the material selected was incredibly intimate and delicate (act I, scenes 2 and 3; act III, scene 1; act III, scenes 4 and 5). Hannigan’s characterisation of Wozzeck’s wife Marie drew us all in, through to the end of the third fragment, where a child’s simple skipping fades off into the distance.

Perhaps nothing could have been a starker contrast to the introverted, inward-looking Berg than the piece that followed. It was here that Hannigan unleashed on an unsuspecting audience the vocal acrobatics that have earned her the reputation as one of the world’s greatest contemporary singers. If there ever was a work to cement your status as such, this was it: Ligeti’s Mysteries of the Macabre.

In an arrangement by Elgar Howarth, material from Ligeti’s opera Le Grand Macabre is presented here, giving us a glimpse of the absurdly eccentric chief of police, Gepopo.

During the interval Hannigan shed her posh frock, propped her hair in pigtails and, as the applause started, strutted out on stage in a schoolgirl outfit, accompanied by gasps of shock and amusement echoing around the Barbican Hall.

A snap, crack and whistle catapulted us straight into this eight-minute whirlwind of vocal virtuosity, Hannigan’s absurdly accurate acrobatics guiding us through a textbook of contemporary vocal techniques. 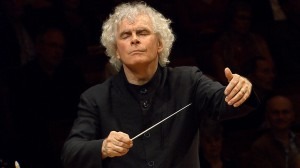 In typical Ligeti style, it poked fun at many of the conventions of the concert hall – an army of percussionists ripping up newspaper, nonsense text spewing out of Hannigan’s mouth, and an anguished interjection from Sir Simon himself, head in hands, shouting ‘not Prime Minister Farage!’ [referencing a recent rise to prominence of a right wing UK political party]. At the climax of the piece, Diva elbowed Maestro off the podium and started directing the players herself, before Sir Simon wrestled control back off the deranged schoolgirl.

Safe to say, it brought the house down, conductor and soloist returning for bow after bow. And from one showpiece to the next: Stravinsky’s Rite of Spring. In too many conductors’ hands the piece become noise after noise, a succession of unrelated orchestral textures, a pitfall which the LSO successfully avoided.

We shall have to see if the rumours are true about Rattle’s return to home shores; but if tonight’s concert is anything to go by, we can only keep our fingers crossed and prepare ourselves for many more thrilling evenings ahead.