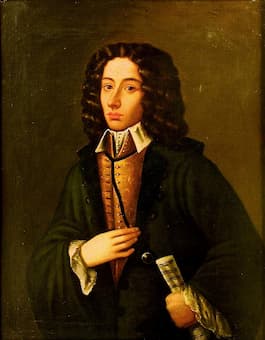 The Baroque composer Giovanni Battista Pergolesi (1710-1736) was a leading figure in the rise of Italian comic opera. The crown of his achievement, according to the 19th century, however, was his Stabat Mater, composed “in a devotional frenzy on his deathbed.” Pergolesi had been suffering from tuberculosis, and the disease would ultimately claim his life at the very young age of 26. Final works, born from misery and suffering, have always held a special place in the human imagination. But let’s start from the beginning. Pergolesi was born in Jesi on 4 January 1710, in what is now the Province of Ancona, but was then part of the Papal States. His grandfather Cruciano Draghi was a shoemaker who moved to Jesi and married a local woman on 1 January 1663. Apparently, the family was not know under the name “Draghi,” but referred to as “Pergolesi,” from the town of their origin “Pergole.” The composer’s father, Francesco Andrea Draghi-Pergolesi was a surveyor with good connections to the local nobility. Sadly, Giovanni Battista was a sickly child, and according to contemporary reports, “suffered greatly from a deformed leg and limped.” 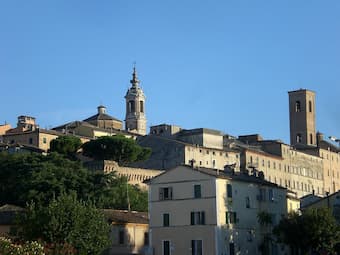 Pergolesi showed early aptitude for music, and he received his elementary musical training from Francesco Santi, a priest who directed the cathedral choir. He also took violin lessons from Francesco Mondini and possibly the Marchese Gabriele Ripanti, and given his obvious musical talent was sent to study at the Conservatorio dei Poveri di Gesù Cristo in Naples at some time between 1720 and 1725. Pergolesi received instructions in composition from Gaetano Greco, and from October 1728, from Francesco Durante. By all accounts, Pergolesi was a diligent student who took part in all manner of musical performances at the conservatory. He first sang as a choirboy, and later performed as the lead violinist of the student orchestra. “His skills and improvisations on the instrument were described in superlatives.” The Naples conservatory accorded its most talented students the opportunity to appear in public as composers. As such, Pergolesi’s sacred drama Li prodigi della divina grazia nella conversione di S Guglielmo Duca d’Aquitania (The Miracles of Divine Grace in the Conversion and Death of Saint William, Duke of Aquitaine) was performed at the monastery of S Agnello Maggiore in summer 1731. 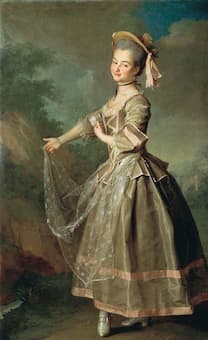 Pergolesi received his first opera seria commission in 1731 from the leading Neapolitan theatre of the time, the Teatro San Bartolomeo. The libretto “Alessandro Severo,” dating from 15 years earlier, was reworked and renamed “La Salustia.” The story is based on the 13-year old Alessandro Severo, who had become Roman emperor after the murder of his uncle. He remained under guardianship of his mother Giulia Mammea, who arranges his marriage to the young noblewoman Salustia. Alessandro soon falls in love with Salustia, names her empress and awards her several honors, which had previously been reserved for his mother. Giulia thus becomes jealous of her daughter-in-law and uses all the resources at her disposal to get rid of her hated rival. 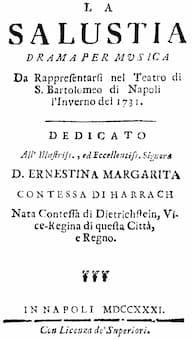 Pergolesi seems to have composed the music in considerable haste, but the failure of the production can primarily be attributed to the sudden death of the leading man Nicolo Grimaldi during rehearsals. The company hired a young and promising Roman singer by the name of Gioacchino Conti as a substitute, but his arrival upset the casting. “The eccentricity of entrusting the role of a wicked father to a castrato, even though it might have been feasible with a tried and tested singer in his sixties, became unacceptable in the hands of a novice who was under the age of 18, so it was decided to make some face-saving alterations.” The opera was staged with substantial revisions and the new cast, probably in the second half of January 1732 and only enjoyed a short run. 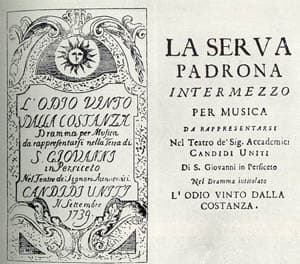 Scholars suggest that Pergolesi’s intermezzo La serva padrona (The Maid turned Mistress) is a work of true genius. “Pergolesi’s basic method of portrayal is the gesture-like buffo style, which he developed to an unsurpassed vitality and effectiveness. In Pergolesi’s hands, it was possible both for the characters to express themselves naturally within the idiom of the music and for the music to make clear the characters’ motivation.” The simple plot features the aging bachelor Uberto who is impatient with his maid Serpina. He believes that Serpina has become so arrogant that she thinks she is the mistress of the household. When Serpina orders Uberto around, he instructs the valet Vespone to find him a woman to marry in order to get rid of Serpina. However, Serpina convinces Vespone to trick Uberto into marrying her. She tells Uberto that she will marry a military man named Tempesta. Vespone, disguised as Tempesta arrives and demands 4,000 crowns for a dowry. Uberto refuses to pay and realizes that he has loved Sepina all along. They will get married and Serpina will now be the true mistress of the household. Because the characters were eminently relatable, La serva padrona became a huge hit. Pergolesi’s music in turn, became “a model for the opera buffa genre and a quintessential piece bridging the Baroque and the Classical periods.”