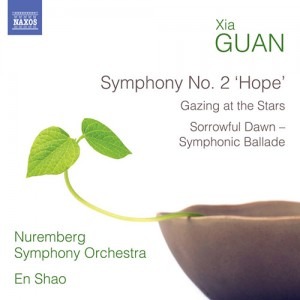 Earth Requiem: I. Gazing at the Stars: Meditation (version for orchestra)

Guan: Earth Requiem: I. Gazing at the Stars: Meditation (version for orchestra)

The music of renowned Chinese composer Xia Guan has been received with acclaim in Moscow, Vienna, Tokyo and New York. The solemn first movement of Earth Requiem, a commemoration of the devastating 2008 Sichuan earthquake, is heard here in an orchestral version that depicts ‘the suffering people who gaze upwards’. The epic Symphony No. 2 ‘Hope’ is a reflection upon the co-existence of good and evil in mankind, agony and hope, in music of considerable breadth and increasing warmth. Heroic drama animates the vividly scored Symphonic Ballade, which draws on the music of Guan’s opera Sorrowful Dawn, the story of China’s War of Liberation following the end of World War Two.