Composers Inspiration
The Life of the Vampire
by Maureen Buja May 4th, 2016 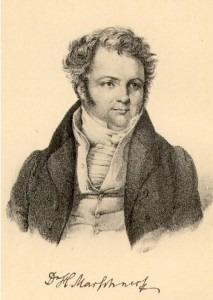 The composer Heinrich Marschner made the most of the vampire craze that swept Europe in the early 19th century with his opera Der Vampyr. The craze had started with a short story abandoned by Byron that was picked up by his physician, John Poliori. Polidori’s The Vampyre made its appearance in 1819 in The New Monthly Magazine and was an instant sensation. In France, vampire plays became the rage; in London, the first vampire play was set in Scotland (1820) and then Germany took up the theme with Der Vampyr, oder Die Todten-Braut (1821).

In opera, there were two concurrent vampire works: Lindpaintner’s Der Vampyr, which held the stage in Vienna, and Marschner’s Der Vampyr, which held the stage first in Leipzig and then all over Europe from Moscow to London. While Lindpaintner’s vampire has vanished from the world, Marschner’s horror opera continues to make appearances. In 1924, the composer Heinrich Pfitzner made a major revision to the score, turning the first half of the first act into a prologue and this is the version that continues to be performed today.

The vampire, Lord Ruthven, has 24 hours to redeem his life by taking the lives of 3 virgin brides. He celebrates his quest in his triumphal aria that opens Act I.

Marschner: Der Vampyr: Act I: Recitative and Aria: Ha! Noch einen ganzen Tag! (Siegmund Nimsgern, Lord Ruthven; Italian Radio Symphony Orchestra; Gunter Neuhold, cond.)
Immediately, however, he gets into trouble. He’s killed the first bride, Janthe, but has been discovered and stabbed. He is rescued by Aubrey who drags him into the moonlight to recover. For this scene, the music starts off simply and then becomes more agitated as the seemingly lifeless body recovers. Aubry is sworn to secrecy and then rushes off in horror. 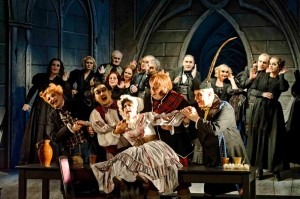 Marschner: Der Vampyr: Act I: Ha, ein werwundeter liegt hier am boden (Siegmund Nimsgern, Lord Ruthven; Josef Protschka, Aubry; Italian Radio Symphony Orchestra; Gunter Neuhold, cond.)
Lord Ruthven, now with the assumed name of the Earl of Marsden, is to be married to Malwina. Malwina is in love with Aubry, of course; he can’t tell her that she’s marrying a vampire because of his oath to remain silent.

In the meantime, two peasants, George and Emmy are married in front of the Earl’s castle. The wedding scene is interrupted by a song by four drunk wedding-goers that was encored at all early performances of the opera, ‘In Summer, man must drink!’

Marschner: Der Vampyr: Act II: Im sommer muss man trinken! (Italian Radio Symphony Orchestra; Gunter Neuhold, cond.)
The bride wanders off, a shot is heard and the groom returns to relate that he’s found his bride murdered, but he’s shot the vampire, who recovers once again (off-stage). Two down, one to go… 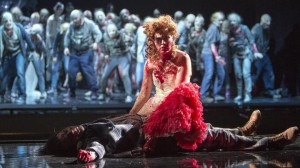 The scene starts with a wedding song, and then around 02:50, our vampire makes his descent into the abyss of hell. Aubry marries Malwina in a happy ending.

Marschner: Der Vampyr: Act II: Wie nach verderblichem wettergetose (Italian Radio Symphony Orchestra; Gunter Neuhold, cond.)
The opera was a critical success and continued the supernatural craze begun with Weber’s Der Freischütz. Marschner, however, was much more progressive in terms of his structure, harmony, and dramatic construction, as well as a much more chromatic tonal palate. Two centuries later, the vampire craze has returned (Twilight, the many Dracula movies, and not forgetting Buffy the Vampire Slayer). I’m not sure if everything old is new again, or it’s just the second rise of the vampire!