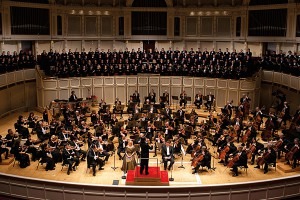 Every day we are presented with lists and rankings that purport to be the ultimate authority on a given subject. From establishing credit worthiness for various nations to slugging percentages of somebody dreadfully overpaid chasing after a small round object, statistical ratings have transformed the way we look at information. And for the most part this works reasonably well because the entire system is based on some kind of mathematical algorithm.

But what happens if these scientific criteria don’t apply? For music we have invented charts and corresponding sales figures to at least come up with a financial ranking. But as soon as we try to quantify and rank a given performance or performer, things get rather subjective in a hurry.
Anton Bruckner: Symphony No. 7 (Chicago Symphony, Haitink)
Very recently, CNN published a list entitled “Top 10 greatest orchestras in the world.” What does a news network functioning as the self-anointed mouthpiece of the United States government actually knows about the world of classical music? Apparently not very much, as the “personal opinion” was supplied by a well-meaning individual empowered by social media popularity and the inability to distinguish between fact and fiction. There is absolutely nothing wrong with having a personal opinion but for the fact that it is personal! It may come as a surprise to CNN that expert reviewers in classical music, those who attend performances on an almost daily basis, actually do exist. They routinely publish a list of the greatest orchestras with Gramophone by applying some fundamental criteria and guidelines to their evaluations. For example, they look at the strength of each section and the principal chairs, and evaluate such technical aspects as balance, intonation and ensemble. Using concert performances and recording output, this panel of expert critics also attempts to assess how well a given orchestral body communicates a variety of musical styles to the listener, and how well they respond to different conductors and concert environments. Such criteria-based evaluations are not set in stone and certainly subject to interpretation and personal taste, but they are the fundamental starting point for any further discussion. Although the “opinion list” did run under the heading “CNN iReport” and carried the disclaimer “not verified by CNN,” it is worrying that CNN would lend its name to such an arbitrary and unqualified uttering. Coming from a network that calls itself “the most trusted name in news,” it certainly makes me wonder how trustworthy they are in reporting other stories. Better to stick to hard-hitting news of relevance to the rest of the world, like a poor squirrel falling off a tree in Alabama!
And by the way, the experts tend to agree that the Chicago Symphony Orchestra is a pretty decent outfit.