When it comes to awards there are very few artists in the same league as violinist Sarah Chang. And I am not just talking about musical awards, but commendations that transcend her professional accomplishments. Together with Pete Sampras, Wynton Marsalis, and Tom Brady, she was featured in Movado’s global advertising campaign “The Art of Time,” and honored in Newsweek Magazine’s “Women and Leadership, 20 Powerful Women Take Charge.” The World Economic Forum proclaimed her a “Young Global Leader, and she received the Harvard University Leadership Award in 2012. Chang is also an official Artistic Ambassador of the United States Department of State. 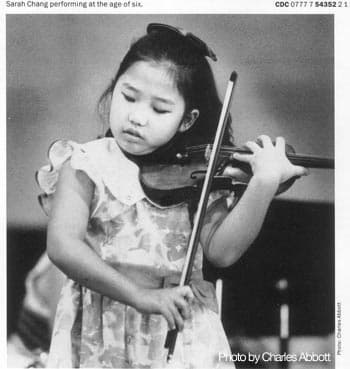 In fact, Sarah Chang has stunned audiences around the world since early childhood. She has been called the finest violinist to pick up a bow, and Yehudi Menuhin described her as “the most wonderful, perfect, ideal violinist I have ever heard.” Sarah was born on 10 December 1980 in Philadelphia, Pennsylvania, only a couple of years after her mother had immigrated to the United States from Korea. Both Myoung Chang and her father Min Soo Chang came from long and prestigious family lines of acknowledged Korean scholars, architects, artists, and musicians.

Classical music was an integral part of the Chang household, and Sarah started piano lessons at the age of three. Apparently, she practiced several hours a day, and making music “proved very easy for her.” However, she turned her attention to the violin at the age of four, and her father relates, “that her fingers were so tiny that he bought her a 1/16th-size replica violin for her to use until her hands grew.” Her mother insisted that Sarah should have a normal childhood, and she divided her practice time into smaller segments, “because she felt that her daughter couldn’t concentrate for hours without a break.” 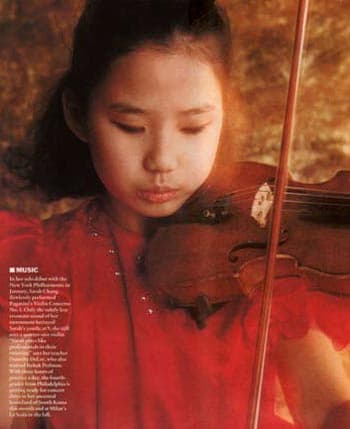 Sarah took her first lessons from her father and her progress was phenomenal. Within a single year of having first touched the violin, she was already performing in public. And within one year she became the youngest student of Dorothy DeLay at the Juilliard School in New York City. DeLay, without doubt, was one of the most acclaimed violin teachers in the world, and her list of students reads like the “Who’s Who” of violinists of the late 20th century.

Chang remembers DeLay as “the gentlest, most generous and loving person. You just relaxed in her presence. But she was tough, she did expect excellence.” According to Chang, DeLay struck a beautiful balance “between nurturing the child she was and respecting the musician she was becoming.” She also remembers how DeLay once took her music and pointed to one note in it, saying, “this note was beautifully in tune,” leaving her with a happy feeling. But later, by herself, she realized: “That meant every other note sucked!” 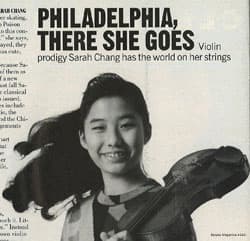 Only four years later, at the unbelievable young age of eight, Chang made her debut with the New York Philharmonic Orchestra. Chang was asked to audition for Zubin Mehta, the artistic director of the New York Philharmonic. The audition was set for Friday, with the concert to take place on Saturday. Mehta had the orchestra fully rehearsed, whereas Sarah had had no practice. Even so, she consented to go on stage with the orchestra and perform. “She played Paganini’s Violin Concerto No. 1, and nearly paralyzed every member of the orchestra. They couldn’t believe that such a tiny girl could play with the maturity of a highly accomplished adult with years of concert hall experience. So stunning was her performance at Avery Fisher Hall in New York City that the audience, including members of the national media and concerto impresarios, stood at the end, clapping and shouting approval.”

Chang recorded her first album, Debut, in 1991, and it quickly reached the Billboard chart of classical best sellers. She performed around 150 concerts a year, and by the age of 15, she had appeared with most of the major orchestras in Europe and the USA, and at leading festivals. 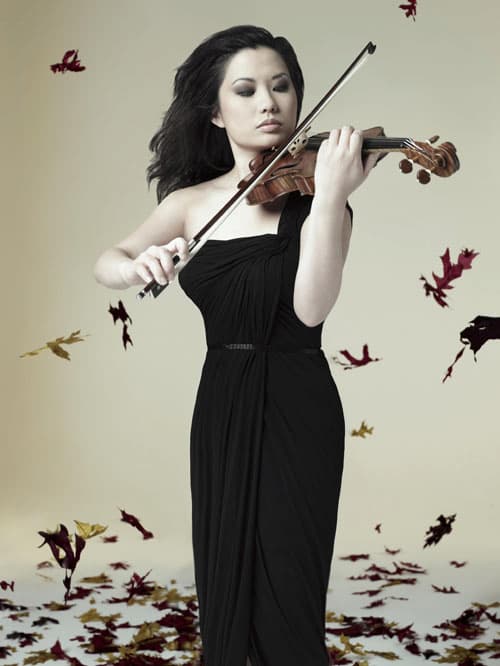 Chang still spends a lot of time on the road, spending a huge amount of time in airports, hotel rooms, and backstage dressing rooms. “But while my career does take up a vast majority of my time,” she explains, “I try to make sure that I take care of myself and my body. I am fortunate to have a tight circle of friends who live in many of the key cities around the world so it’s fabulous when I can carve out time to go to the movies or shopping or dancing and just have a normal evening once in a while!” Nevertheless, Chang has always loved performing, and she writes “there is really nothing that compares to being on stage. I think that feeling is really addictive and so fabulous that you can’t describe it. And once you’re up there from a young age, you’re completely hooked. And nothing else comes close. I love travelling, I love recording, but ultimately it all comes down to those 40 minutes that I’m on stage. It’s pretty amazing.”