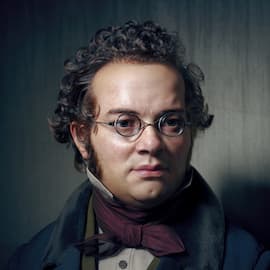 Impromptus in all but name, the three “piano pieces” D946, were completed in May 1828, the year Schubert died, and follow the far more well-known and popular Impromptus D899 and D935, which Schubert composed the previous year. Like the Impromptus, the Drei Klavierstücke express in microcosm so much of Schubert’s unique soundworld and musical personality – daring and unusual harmonies, beautiful songful melodies, and episodes of profound poignancy or intimacy. Throughout these three pieces, we hear the extraordinarily broad scope of his creativity and emotional landscape.

“He has sounds to express the most delicate feelings, of thoughts, indeed even for the events and conditions of human life.” – Robert Schumann

Untitled and unpublished in Schubert’s lifetime, it was Johannes Brahms who anonymously edited and published the Drei Klavierstücke in 1868 and gave the works their collective title. These three pieces are rarely performed and are, in my opinion, unfairly neglected.

The first, in dark, turbulent E-flat minor, was originally conceived as a five-part rondo, with two contrasting episodes (ABACA). The work appeared in this form in Brahms’s and subsequent editions, although Schubert’s autographed version omits the second episode, leaving the work cast in ternary (ABA) form, though some recordings include the C section (such as Michael Endres, below). The A sections have a fervid urgency, with propulsive triplets and dotted rhythms, and even when the music gives way to E-flat major, it remains highly agitated, culminating in a series of forte off-beat accented chords.

The middle section, marked Andante, is strikingly different in mood and key. Now in luminous B major, the music moves into a lyrically expansive yet intimate slow movement, marked by rich chords, filigree ornamentation, highly virtuosic episodes and dramatic tremolandi. A bridging section of repeating triplets returns to the music to the A section.


The second of the triptych is a five-part rondo. It opens in E-flat major, which connects it to the previous piece, though it is not known whether Schubert conceived the three pieces to be linked. An elegant barcarolle, the A section has an aria-like melody coloured by harmonic shifts between major and minor. The first contrasting section is in C minor, its drama created through a rumbling tremolando figure in the bass and a muted dynamic range. The A section is reprised once more before the music moves into a new key, A-flat major, and a change of metre, though not of pulse. Here, there is poignancy and intimacy, portrayed through descending repeated chords and subtly nuanced dynamics. Another striking modulation takes the music into G minor for a more declamatory section before the music subsides back into the previous section. The final reprise of the A section brings a generous, good-natured warmth and serenity to the music.


The final piece of the three invokes similar rhythmic and emotional contrasts as the previous two, and once again offers a strong contrast between agitation and serenity. Like the first piece, it is cast in ternary form, its outer sections in bright C major with a syncopated main theme which underlines the music’s breathless, excitable pace. The middle section could not be more contrasting. Now in D-flat major, a mere semi-tone away from the original key and a typically daring harmonic juxtaposition, the music has a hypnotically repeated rhythm and haunting quaver figures, like distant horn calls.