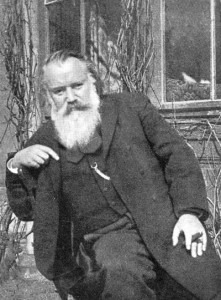 Johannes Brahms never formally went to university, and his engagement with higher education was rather peripheral. Around age 20, Joseph Joachim invited him to Göttingen, where the violinist was taking summer courses in philosophy and history. Brahms accepted the invite, and for two months he became part of the student crowd. He enjoyed reading, debating, beer-drinking sessions and sing-alongs at the local beer halls. But once he had raised enough money by giving a recital with Joachim, he departed for a walking tour of the Rhineland. It took another 23 years before Brahms had another brush with academe.

Cambridge University offered him an honorary Doctorate in Music in 1876, but required his presence at the ceremony. Brahms was mortified by the mere thought of having to cross the Channel, and once he became aware of the planned lavish festivities, he decided to stay home. 3 years later, the University of Breslau conferred upon Brahms the honorary degree of Doctor of Philosophy. The degree came with a rather pompous Latin inscription proclaiming Brahms as “the foremost composer of serious music in Germany.” Brahms was flattered and casually sent them a little thank-you note, saying that he would come to Breslau next year in hopes of enjoying a few “doctoral beers.” However, Bernhard Scholz, the Director of Music in Breslau made it clear that the university expected something a little bit more substantial. A “grander gesture” of thanks would be required, and no less than a freshly composed symphony would do the trick. Brahms was taken aback, and it took him more than a year to compose his doctoral thesis, the Academic Festival Overture. Scholz disliked the name and suggested “Viadrina” the Latin name of the River Oder, which flows through Breslau instead. Brahms thought about it for a second and then discarded the suggestion. And since Brahms had a rather wicked sense of humor, it was hardly a composition the University had expected. Instead of a symphony or grand choral work, Brahms provided a medley of student songs celebrating drinking and general rowdiness, and that included a fraternity initiation ballad! Brahms was mercilessly mocking the seriousness of the degree and those who had bestowed the honor upon him. There is no doubt that high administration—sitting in the front row at the premiere performance in January 1881—got the message!