Artists Behind the scenes
The Ochydactyl
by Georg Predota July 5th, 2018 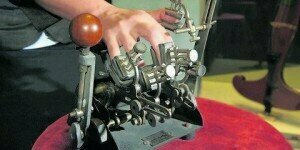 Please let me introduce you to probably the most horrendous musical torture device ever invented. It might reasonably have been used to extract confessions during the Spanish Inquisition, but in reality, it was a patented apparatus that was to increase the nimbleness of musician’s fingers, and give them independent action and strength. It was called “L’assouplisseur Ochydactyl” (The Finger Softener), and invented by the Frenchman Georges Rétif in 1922. 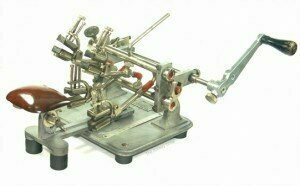 The device gained a U.S. patent in 1929, and the description reads, “Skill in playing musical instruments is acquired only after prolonged practice, which endows the performer’s fingers with nimbleness, independent action, and strength. The objective of the musical exercises performed by the student is to develop certain muscles of the fingers and to render their action independent, since naturally these muscles have a tendency to act in pairs. The objective of the present invention [The Ochydactyl] is to replace this long, arduous study, which in the case of students of no great talent sometimes without success, by an adaptation of the muscles acquired mechanically. The part of the operator is reduced to a simple, passive resistance or contraction opposed to the forced movements.” 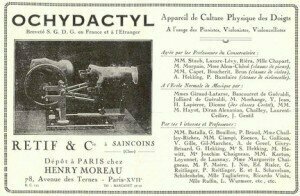 Georges Rétif kept tinkering with the design. Instead of the early flywheel propulsion, later models had a simple handle. Additionally, early models were completely exposed while the latter variety was enclosed. But these variant models all worked the same. The user would insert four fingers into the adjustable, rubber-padded clamps, with the wrist resting on the seat. With the other hand, the aspiring musician would crank the gears in either direction, drawing the fingers up or down. Although advertisements for this machine name dozens of prominent musicians as proud sponsors, the Ochydactyl had very little marketable success. Produced in Sancoins, most were sold within France and neighbouring countries. It did promise that seven minutes in the machine would equate to over an hour of traditional digital exercise. What they forget to tell you was the fact that the probability of permanent and irreversible damage to your hands was significantly high!