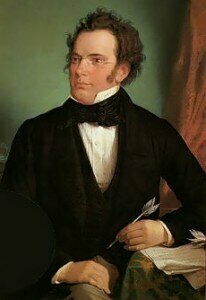 In the month before his friend Ferdinand Walcher quit Vienna for a posting in Venice, Schubert had been a torchbearer at Beethoven’s funeral. The death of his greatest inspiration, whom he had only been able to meet days before Beethoven’s death on 26 March 1827, and the departure of a close friend both seem to have an influence on the work Schubert wrote for Walcher’s departure.

The Allegretto in C minor is a lovely little piece of farewell, yet with a hint at the very end of a return.

The work open with extensive arpeggios in C minor, as though the composer was just sitting at the piano noodling around. But the melody is very Beethovenian in its simplicity and inspiration. The turn toward C major gives us a hint of Schubert’s optimism at the eventual return of his friend. The middle section in A flat major breaks away from the arpeggios, and little chords are formed, breaking from time to time into small melodic pieces. The piece closes with a return to the opening section in C minor, but again with a turn towards C major for the ending.

Ferdinand Walcher (1799-1873), was a lawyer who worked for the War Office in the Navy section. He became a member of Schubert’s circle in 1826, becoming a close personal friend by 1827. He was an amateur singer, with a low tenor voice, who was known for singing Schubert’s songs ‘most beautifully.’ In May 1827, Walcher was posted to Venice, where the Imperial Fleet had its base, and in response, Schubert bid him farewell with the Allegretto. Walcher seems to have returned to Vienna often, as he’s recorded as being at the first semi-public performance of Ständchen, D. 920, in Vienna, in January 1828. One attendee recalls that Walcher had to go and get Schubert from a nearby beer cellar, as he had forgotten all about the concert. Walcher continued on in a successful career, serving first under Archduke Karl and then under his son, Archduke Albrecht, eventually being promoted to knighthood in 1865, and being given the name ‘von Uysdael’.

The work appears in a farewell album for Walcher and wasn’t published until 1870, more than 40 years after Schubert’s death.