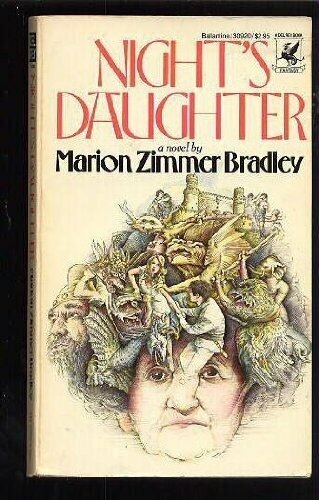 Although we think of some of the more over-the-top science fiction as “Space Operas,” there are books where Operas feature in Science Fiction. In some cases, this means that there’s a science fiction story where opera has a role, but in one case, the whole story is built around the idea that the opera story is real.

Marion Zimmer Bradley’s 1985 novel Night’s Daughter takes its inspiration from that wonderful creation by W.A. Mozart and Emanuel Schikaneder in 1791: Die Zauberflöte. What if Pamina were really the daughter of the Queen of Night? What if Papageno were really a hybrid human/bird man and the problem with him finding a Papagena comes from his unique parentage? Bradley follows the lead provided by Ingmar Bergman, in making Sarastro the father of Pamina, rather than the neighbor who was given the power that the Queen seeks. At the same time, Bradley takes the greater scope possible in a book to flesh out the characters and the situations they get involved in. 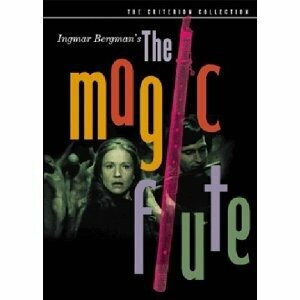 The Queen of Night used to be married to the Great Serpent and had three daughters – martial Halflings who are serpent-folk. Then, when marriage between humans and animals was banned, the Queen married Sarastro and they had Pamina. The two human separated and Pamina was brought up by her mother, kept in a state of innocence about the blood sacrifices that are necessary to the Kingdom of Night. Tamino, second son of the Emperor of the West, is seeking Sarastro’s Temple of Wisdom so that he may undergo the Ordeals that are the prerequisite of any who would marry. He, of course, wanders into the Queen’s realm, but makes a better showing against the dragon than does poor Zauberflöte Tamino, with his sorry entrance crying “Hilfe!”. Nonetheless, the 3 serpent sisters rescue him by killing the dragon, admonish Papageno for his claims (rock, water, and a bridle to silence his tongue), and introduce him to the Queen whose daughter has been kidnapped. Just as in the Bergman movie, the picture of the young Pamina is animated – at first appearing as a tear-stained portrait and later, as he sets off on his misguided quest, showing Pamina menaced by a dark shadow lurking behind her. 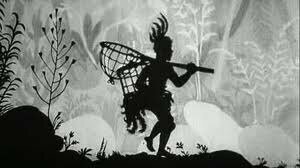 Monostatos is much more menacing than in any opera setting – he, too, is a Halfling, son of the Great Serpent. He is a real threat to Pamina, at first just watching her from the sidelines and then forcibly extracting kisses and threatening her. Papageno finds her, they escape, and they are captured again by Monostatos. When Pamina must face Sarastro for running away, for the first time she must confront her innocent belief in her mother in light of the revelations of Sarastro about his former wife.

The Ordeals (of Earth, Air, Water, and Fire) are different for each seeker and, in threatening Pamina, Monostatos has failed the Earth Ordeal – he is banished. This is a clue for Tamino that the names of the Ordeals may not equate with the temptations he must face. 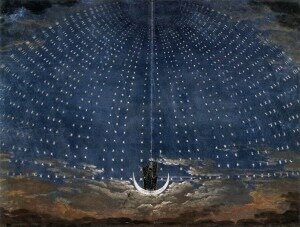 The Ordeals of Air, Water, and Fire, which are in the opera, are given much more detail in the book. The Ordeals are completed by Tamino and Pamina together. Through these trials, they each learn of their own and the other’s strengths. They learn when they must command and when they must work with the Halflings to accomplish the Ordeals.

The final scene in the opera with the Queen, when she, Monostatos and the three women seek to attack the Temple of Wisdom, makes much more sense here. The Queen goes after Pamina, trying to get her to come back to her side. This is when her three martial daughters understand that Monostatos is their half-brother, since they are all children of the Great Serpent, and that the dragon that they killed at the beginning of the book/opera was, in fact their father. Pamina has gained the strength through the ordeals to command Monostatos and the Queen to become their inner selves – Monostatos becomes a mindless lizard and the Queen becomes an Owl, the Bird of Night. Tamino, through playing the flute, aids Pamina in these transformations.

Although nothing can replace the magic of the Magic Flute, Bradley has brought to the story the same questions that we have: where did Papageno come from? Is the Queen bad or good at dissembling? By providing the back story and a greater depth of character, Bradley gives us a new way of appreciating those elements that Mozart and Schikaneder could only hint at. There’s a great deal of humor in the book: when Tamino is given the flute, he wishes it could have been a much more useful tool, such as a sword, and other elements remind us of the lightness of the opera.

This book is long out of print but is readily available on the second hand market, or for your Kindle.