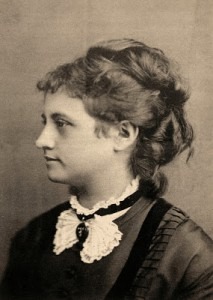 Fabled pianist Eugen d’Albert compared his wives to Beethoven symphonies. He once told a friend that he intended to marry until he got up to the ninth, with chorus! Unfortunately, he only lived long enough to manage the “Pastoral.” For most people, according to Elsa Galafrés, second wife of Ernst von Dohnanyi, d’Albert’s actions were frankly immoral. Her husband however, did not see d’Albert as an adulterer, “I would call him rather a marriage fanatic, who can only enjoy love fully in a legitimate way!” Johannes Brahms, who performed with d’Albert on a number of occasions, had his own take on the pianist’s romantic adventures. Relying on his patented sarcasm Brahms “found it entirely monotonous that the fellow still had the same wife as on his previous visit.”

The marriage carousel got started with the then under-aged Louise Salingré, who was employed as an actress at the Weimar Theater. The attraction was instantaneous, but Louise was not yet legally of marriageable age. As such, the couple packed their suitcases in 1884 and secretly traveled to the island of Helgoland, which surprisingly allowed for juvenile unions. The blessed union immediately produced a child, but married life turned out to be not entirely glamorous. For one, Eugen was a militant vegetarian and would not allow his wife or children to eat any kind of animal matter. But even worse, he was a fanatical disciple of the esoteric Dr. Jäger, the inventor of quality undergarments that could never be washed. As such, the couple never took luggage on their travels, and Louise laconically commented, “we don’t need a change of clothes; we just air out the ones we’re wearing.”

Four years into their marriage, Louise accompanied her husband and Pablo de Sarasate on an extended tour of America. Initially, it looked like a dream vacation, but in the end it turned into a nightmare. Frustrated with her vegetarian life and unwashed undergarments at home, Louise jumped at the chance to reclaim her life. She bought an expensive wardrobe, ate steak sandwiches for breakfast, and engaged in a number of flirtatious affairs. As might be imagined, Eugen would have none of it! On a number of occasions, neighbors had to call the police to separate the rowing couple. Details are sketchy at best, but Louise descended into severe depression and had to be admitted into psychiatric care. Her husband, meanwhile, happily continued his concert tour with Sarasate. 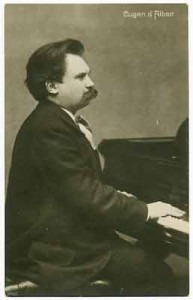 On his return to Germany, d’Albert filed for divorce and started to look for wife number 2 in earnest. In 1891, the sensational Venezuelan pianist, singer and composer Teresa Carreño made her Berlin debut. D’Albert was eager to check out his professional rival and in the process fell head over heels in love with her “musical interpretations and her radiant beauty.” Carreño is significantly older and taller than Eugen, and has 5 children from her previous marriages to the violinist Emile Sauret and the operatic star Giovanni Tagliapetra. Initially, Teresa is not impressed with “the little unkempt gnome,” but when he sits down at the piano and plays for her, he miraculously transforms into a “fairytale prince.” They decide to perform in a number of “Doppelkonzerte,” events that featured both pianists. Generally, it was agreed that Teresa was the better pianist, but that Eugen was the greater musician.

Wedding bells rang out in 1892, and their union was the subject of the famous joke, “Come quick! Your children and my children are quarrelling again with our children!”
The marriage was, rather predictably, a stormy but short-lived affair. Eugen was jealous of Carreño’s pianism, and she resented the fact that he tried to change her playing. Fiery conflicts were inevitable, and on the day that Teresa gave birth to their second child, Eugen told her that he was filing for divorce. I am not sure that Teresa saw it coming, but she certainly had friends in the legal profession. She demanded a 70000 Marks settlement, plus the return of all her money she had put into the common household. The war of the roses dragged on for months, but at that time Eugen d’Albert had already cast his eye on wife No. 3, the singer Hermine Finck.