In Homer’s Odyssey, during his 10-year struggle to return home, Odysseus is stranded on Calypso’s island. Although she promises him immortality, he yearns to return home and after seven years as her captive, he’s able to leave only when Zeus orders his release.

In the painting Odysseus and Calypso by Arnold Böcklin, painted in 1882, the two figures are shown in different poses. Calypso yearns for the unattainable, and Odysseus yearns for what is far away. 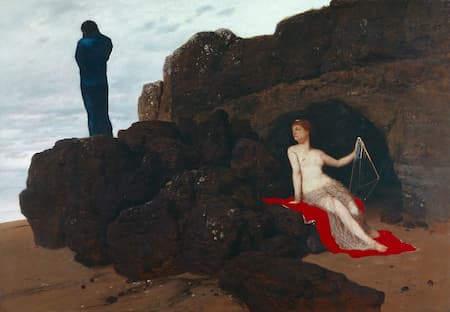 Calypso lived on the island Ogygia and enchanted Odysseus to her shores by her singing as she worked on her loom with a golden shuttle. In Böcklin’s painting, Calypso is shown with her lyre, rather than her loom. She looks up the rocks towards Odysseus, shown only as a brooding statue-like figure. He looks out to sea, standing in a hunched posture. He faces away from the nymph, turning his back on what she would give him. One writer described this ‘a stark image of a barren landscape and empty relationship.’ Another saw it as filled with a kind of ‘morbid symbolism’ that anticipated imagery of 20th-century art.

In Homer’s description of Calypso’s cave in Book 5 of the Odyssey, it is described as a lovely spot. ‘Round her cave there was a thick wood of alder, poplar, and sweet-smelling cypress trees, wherein all kinds of great birds had built their nests—owls, hawks, and chattering sea-crows that occupy their business in the waters. A vine loaded with grapes was trained and grew luxuriantly about the mouth of the cave; there were also four running rills of water in channels cut pretty close together, and turned hither and thither so as to irrigate the beds of violets and luscious herbage over which they flowed.’ (Butler translation). Böcklin, however, seems to have created his landscape based on the anguish of Odysseus. It’s all sand and bare rocks, with only dead sea shells and lichen for relief.

Calypso is shown seated on a beautiful red rug with gold edges, she’s cladded in the most transparent of garments and looks away from her lyre with a most unhappy look on her face. Nothing she can offer the hero will satisfy him.

He stands as a statue, an immovable rock, turned away and brooding. Faraway, the sky blends with the sea in blue. The weather is overcast and seems as unhappy as he is. 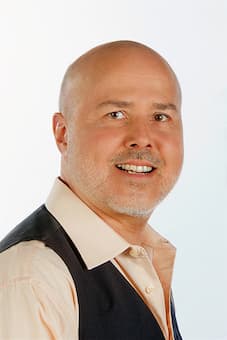 When Hermes, the messenger of the gods comes to tell Calypso the gods have decided she must release her captive, she’s furious that they would make her, a woman, send away Odysseus when the gods never had to send away their lovers. Odysseus is described as being ‘on the sea-shore as usual, looking out upon the barren ocean with tears in his eyes, groaning and breaking his heart for sorrow.’ His days were spent ‘on the rocks and on the sea shore, weeping, crying aloud for his despair, and always looking out upon the sea.’ and so Böcklin has shown him.

In his work for guitar duo, German guitarist and composer Volker Niehusmann (b. 1963) begins with the lonely song of Calypso, as she tries once again to get the attention of Odysseus.


In the second movement, her song slows and becomes introspective. She knows that when he departs, as the gods have ordered, she will be left with only the company of her loom and her lyre.


In the end, as she speeds him on his way, she gives him a song to remember.


Despite being inspired by a painting of two people, the composer has chosen only to preserve one in music. It remains for someone else to immortalize the sorrow of Odysseus.