Created for the celebrations for the 100th anniversary of the Gelsenkirchen town bank, Bernd Alois Zimmerman’s 1968 work Photoptosis (Incidence of Light) looked to the gigantic paintings created by French artist Yves Klein (1928-1962). Klein had been invited in 1959 to decorate the new opera house in Gelsenkirch and he created 4 murals, the largest being 20 m long by 7 m high (65.5 feet x 23 feet).

Klein was known for his work on monochrome (single-colour) paintings beginning in 1949, with his first exhibition in 1950. Initially using a wide-range of colours, Klein was disappointed that the viewers tried to link the colours together as a kind of ‘bright, abstract interior decoration’. He then chose to concentrate on one single colour, blue. 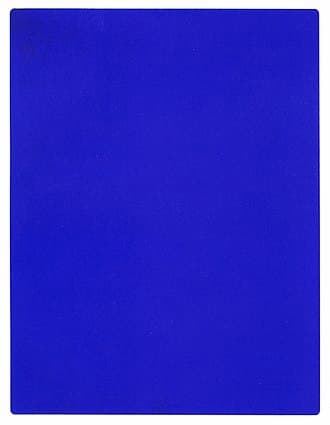 The colour, eventually copyrighted by Klein, was created by ‘using ultramarine pigment suspended in a synthetic resin’. He created more than 200 paintings in this International Klein Blue (IKB). 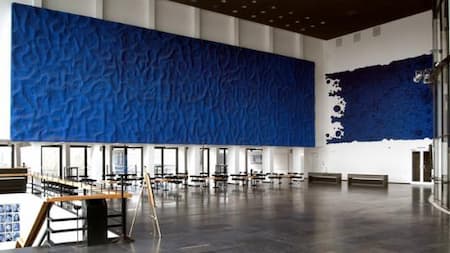 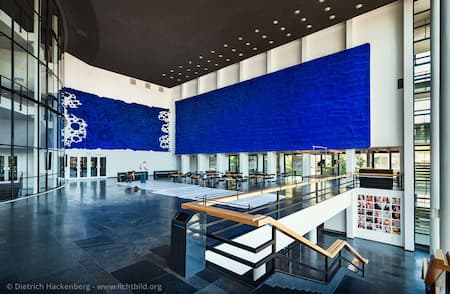 For the Gelsenkirchen Opera House, he created his monochrome sponge sculptures in a new blue, Gelsenkirchen Blue, when IKB could not be used on the large spaces because ‘the acetone-based mixture evaporated, the paint lost adhesion and luminescence, and it was highly flammable.’ 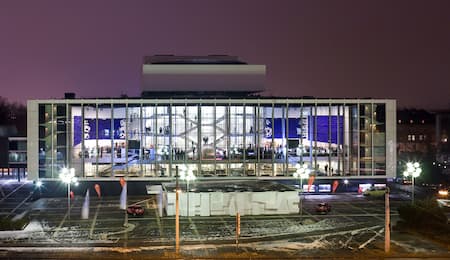 Façade of the Musiktheater im Revier with Klein sculptures visible

A close look at the sculpture shows their three-dimensional build-up, made with sponges. 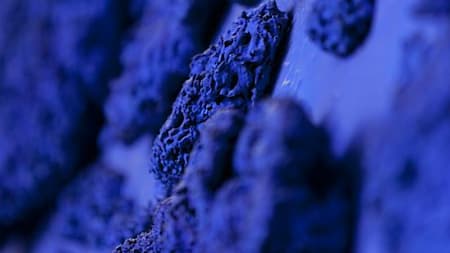 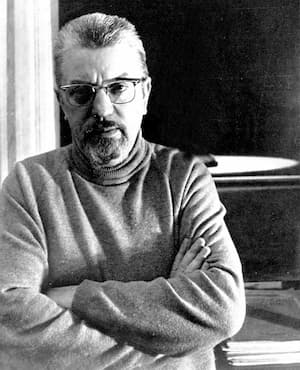 In his work created a decade later, Bernd Alois Zimmermann started his work oscillating around the two notes D and F-flat. Only a semitone apart, the two pitches become a familiar sound. There’s a certain amount of vagueness in the sound world, and it’s almost as if we’ve stepped into the sculptures and submerged ourselves in their colour world.

In the middle (06:55) familiar sound emerges, some of the beginning of the fourth movement of Beethoven’s Ninth Symphony. All of a sudden, the chaotic sound world calms for a minute.

By the end, however, the pace is more frenetic, the percussion fights the brass, and then it all stops.


With the sponges remaining from his work on the gigantic Gelsenkirchen pieces, Klein created another body of work, Bas-reliefs dans une forêt d’éponges, in which was exhibited at the Galerie Iris Clert in Paris in 1959. Klein had noticed how the sponges he used while painting absorbed the blues and turned blue themselves – a working tool had become a medium of expression. Just as he expected the viewers of his monochromes to fall into the colour and come back changed from the experience, the blue sponges were impregnated with colour in the same way. 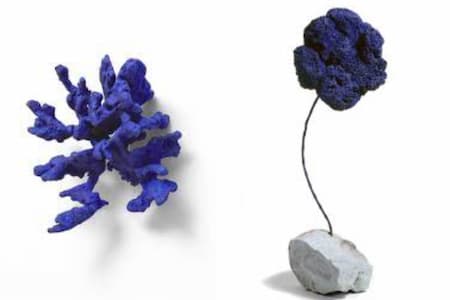 Klein was also a composer, but very much in the style of his monochrome paintings. His 40-minute Monotone Silence Symphony, 1949, consisted of a single 20-minute sustained chord followed by a 20-minute silence. One writer described a performance as creating “a sensation of vertigo, whirling the sensibility outside time.”