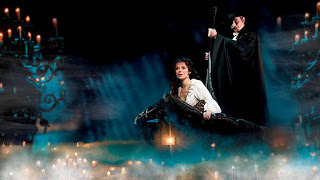 The Phantom of The Opera
Credit: http://3.bp.blogspot.com/

The statures of musicals and operas seem worlds apart – opera’s for the snobs, musicals are for the masses, right? This is, thankfully, becoming more and more of a hackneyed stereotype, untrue of the current situation. Opera companies are trying harder and harder to broaden their appeal – and (hopefully) not just for financial reasons. Opera plots do actually resonate with an audience, much in the same way as those of musicals. And this isn’t the only way in which they’re similar…

In terms of the production itself, operas were often made possible by an impresario, a figure with the vision (and money!) necessary to put on a production. Domenico Barbaia, a famous impresario of the late 18th and early 19th centuries could be compared to today’s Cameron Mackintosh. Whilst the role has changed fairly substantially (Mackintosh is more of a producer than an impresario), the role still remains: a centralised figure around whom the production revolves.

We all like a good tune – and nothing’s changed! In the olden days, people used to go and see operas many times over, singing along in their favourite places, and applauding everywhere. And it’s the same with musicals now! Every show has that catchy song. And don’t forget: opera was a more ‘popular’ entertainment back then; it wasn’t as ‘lofty’ as it seems nowadays. Although opera plots nowadays are possible to relate to, they (arguably) resonated more strongly with their original audiences, much in the same way that nowadays musicals often deal with very relevant social situations. 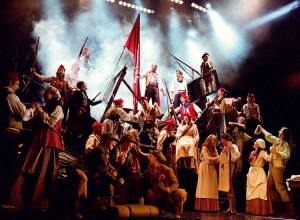 Now, behind 99% of all musicals is at least one hit song. You get to that point in the show where you hear it, and think ‘Oh! That’s where it’s from!’. Opera composers were always striving for that hit, for that one good tune to pull in the punters, and you often hear people moaning about the formulaic structure of many songs in musicals; however, this isn’t anything new. Composers have been exploiting certain musical tricks for a long time before the twentieth century. Look at any big opera by Verdi or Puccini. They knew when a tune was going to be a hit – and they worked this into the music accordingly. Think of any big aria – chances are it’ll end with a big climax, a long chord, or something to give a sense of ‘finality’. There’s space there for the audience’s applause – and this is no different to today’s shows.

The often-ridiculed ‘gear change’, changing the key of a song near its end, whilst musically jarring (out of context a modulation up a semitone sounds fairly ridiculous), is designed to stir the audience. It’s no accident that this kind of device has become commonplace in many musicals, much like the big arias of the nineteenth century. And while some will argue that Verdi has more ‘compositional virtue’ than Andrew Lloyd Webber, the fundamental principle is the same: give the crowds what they want.

So, although you might be loathed to admit it, musicals and operas seem to be closer relatives than many give them credit for. They were both originally designed for large audiences (don’t be mislead and think that opera’s always had its highbrow connotations); they often have big numbers to draw in the crowds; songs and arias often follow a well-known structure, designed to get a specific effect from the crowd. It’s wrong to say that all operas and all musicals are on the same plane as far as their compositional aspects are concerned – I know of many musicals that have more original and inventive material than many operas, and vice versa – but at least as far as their function is concerned, they can be seen as one and the same.

Lea Salonga – On My Own (Les Misérables)

Phantom of the Opera – Music of the Night