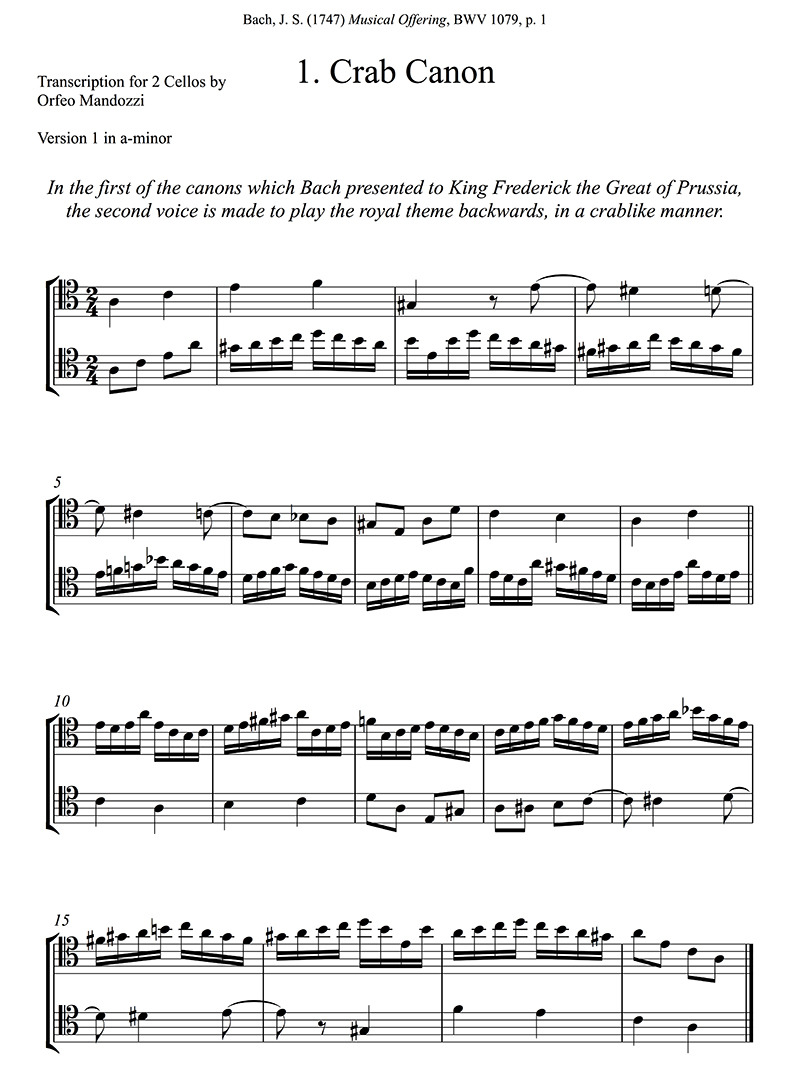 Although the brain is technically not a muscle, the old saying “use it or loose it” still applies. And when musicians and composers get together to exercise the little grey cells, they generally look towards puzzle canons for a brainy workout. We all know that a canon uses musically identical lines, which are imitated at a given time and melodic interval to produce a contrapuntal composition. If a canon uses musically identical lines imitated at the same pitch level, we generally speak of a “round.” Quickly sing through “Row, row, row your boat” with a couple of friends, and you know what I mean. In a puzzle canon, however, only one voice is notated and the rules for determining the remaining parts and the time and musical interval of imitation must be guessed. Frequently, the composer provides clues, hints, cryptic symbols or texts in a variety of languages to allow the musician to arrive at a proper musical solution.

Some of the most famous puzzle canons in music history stem from the pen of Johann Sebastian Bach. A meeting between Johann Sebastian and Frederick the Great of Prussia on 7 May 1747 led to the publication of a set of compositions on a “Royal Theme,” which has become known as The Musical Offering. It included two “Ricercars”—two fugues in antiquarian notation for three and six voices, respectively—and a “Triosonata.” However, Bach also included 10 puzzle canons, in which Frederick the Great had to musically decipher the entrances of successive voices via cryptic symbols or through Latin inscriptions. There is no suggestion that Frederick the Great ever tried to solve the puzzle canons—Bach seems to have encoded his particular dislike of the secular, fashionable and homosexual Great of Prussia—but that should not deter you from trying your hands at a bit of Musical Sudoku!

Let us start with a relatively easy—for solving only—puzzle canon from The Musical Offering. The first canon, as you can see in the inscription, requires two voices (Canon I a 2). It very obviously notates Frederick’s “Royal Theme,” but where is the second voice? Where should it enter, and what kind of imitation did Bach have in mind. For the solution, you have to look for the clue given at the end of the piece. There you can see an upside down clef and key and time signatures. As such, the second canonic voice starts simultaneously, but sounding from the back to the front. While the first voice starts at the written beginning, the second voice plays the “Royal Theme” backwards, in a crablike manner! The solution, as you can see, is a classical “crab canon,” which requires two musicians to play from opposite directions. Once the central pole is reached, the players reverse directions towards where each had begun. As such, both musician play the music forward and in retrograde. Now, how is that for a bit of musical fun to boost your brainpower?