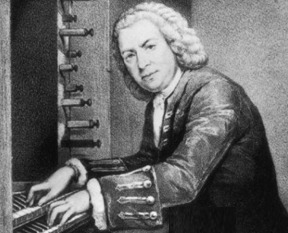 Now that your little grey cells are all warmed up, are you ready for a more complicated puzzle canon from Bach’s Musical Offering? If so, the 4th canon will probably give you a very good workout, indeed. Bach inscribed this musical Sudoku with the following message: “Canon 4. a 2 per Augmentationem contrario: Notulis crescentibus crescat Fortuna Regis.” As you can tell, it will immediately be extremely helpful to know a little Latin! From the first part of the inscription we learn that we need to look for 2 voices in a canonical relationship. We also learn that the canonical voices go in opposite directions (contrario), and that one of the voices will increase in duration (augmentationem). This increase in the length of the notes is clarified in the second part of the inscription, “May the fortunes of the King (Frederick the Great of Prussia) increase like the length of the notes.”

With the preliminaries out of the way, we can finally look at the score. Initially, you will notice three clefs, a C-clef in the upper section and a C-clef and an upside down G-clef in the lower section. In total, we are thus looking for three independent voices. The upper voice, as you have surely recognized already, plays a variation of the Royal theme. And so it follows that the two lower voices must engage with the canonic relationship described in the inscription. And we have a clear sign after ½ measure indicating that the canonic voice should start here. In canon terminology, the first canonic voice is called the “leader,” and the second canonic voice the “follower.” So the “follower” enters after ½ measure, and according to the upside down clef at the beginning of the system, imitates the “leader” in the opposite direction. Since the “leader” starts by going upwards, the “follower” starts by going downwards. This now is the fundamental canon, and you will hear it performed this way.

But wait, the inscription also mentioned “augmentation.” Augmentation means to increase, and the inscription clearly states that the notes grow in duration. So the notes of the follower can be played in a version twice as long as the leader. That is, it moves at half speed. The result is that the leader is played twice, and the follower once. The leader starts on “c,” while the follower starts on “g” ½ measure later, plays in opposite direction, and with notes twice as long as the leader! To be completely true to Bach’s inscription, however, the follower can also be played with notes four times as long as the leader. Of course, the process of continued augmentation becomes completely nonsensical after a while as the augmented voice will reach such extended duration that performers will have no choice but to stop. So Bach managed to compose a contrapuntal masterpiece while simultaneously making fun of the king. How cool is that!