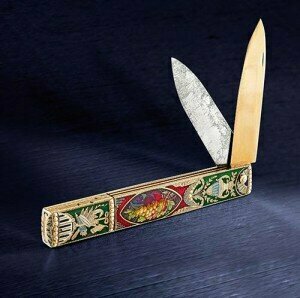 I trust you have previously enjoyed reading about the “Musical Bed” and the “Musical Bike”. Now, here comes a real musical curiosity in the form of a double-bladed musical knife! It is a rare treasure indeed, as only three of these items are known to have been crafted. Originating in Switzerland and dating from the early 19th century, the knife is beautifully encased in elaborate enamel and pearl decorations, and designed for cutting both fruit and flowers. The correct usage of each blade is determined by examining the designs on each side of the knife’s handle. The gold blade corresponds to an assortment of fruit, while the steel blade is assigned to a bouquet of flowers. It’s all very logical indeed, as the corrosive effects of fruit juice do not affect the gold blade. Luxurious miniature novelties like this knife became exceedingly popular during the late 18th century and reached markets far beyond Europe. 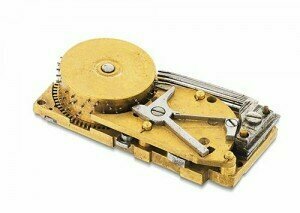 The party piece of this knife, however, is in the musical mechanism hidden inside. The technology to miniaturize the musical mechanism was developed by the Swiss watchmaker Antoine Favre-Salomon (1734-1820). In 1796, Favre-Salomon replaced the common stack of bells used in clocks with a comb containing pre-tuned metallic notes. Together with a horizontally placed pinned barrel, this produced a more varied and complex sound, and substantially reduced the space requirements for the mechanism. Isaac Daniel Piguet took this idea further and produced musical watches with a pinned horizontal disc operating radially arranged tuned steel teeth in 1800. This method of miniaturizing the musical mechanism became all the rage, and clockmakers around Geneva produced musical objects in great quantities, probably including the featured musical knife. We can assume, however, that the musical knife was primarily an object of admiration rather than serving a practical purpose.