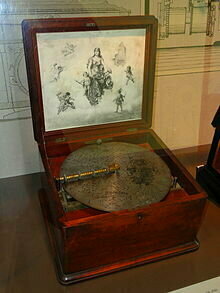 For a great many people, the car is a fantastic place to enjoy music. And predictably this pleasure manifests itself in a variety of musical and cultural practices. It ranges from background eavesdropping during a long commute to turning vehicles into humping and grinding musical platforms, ensuring ear-shattering musical entertainment for the entire neighborhood. But the concept of enjoying music while on the move is not confined to the car. In fact, Samuel Goss of Chicago registered a patent on 18 August 1897 for a musical bicycle. “My invention relates to bicycles, and has for its object to provide a combined bicycle and musical instrument whereby the rider when so disposed may treat himself and others in his immediate neighborhood to a musical accompaniment as he rides along.” Essentially it’s a giant music box mounted on the frame and driven by the pedals. The spinning cylinder is attached below the cross bar of the frame, and a series of pulleys and mechanical connectors urges hammers to strikes wires, thereby producing musical sounds. Goss stipulated that increasing the number of wires would allow for performances of even more complicated pieces. 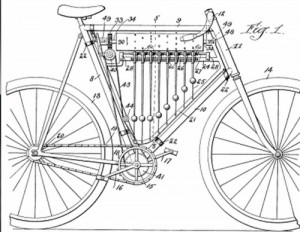 Initially, the inventor devised his musical bicycle for racing, claiming that the music would encourage the rider to go even faster. However, this sounding invention was clearly driven by the enormous popularity of the music box. And one of the biggest names on the American market at that time was the Regina Music Box Company. Founded near Leipzig in Germany, the company set up shop in the United States to avoid high import tariffs imposed in 1890. Their disc playing system produced music boxes in any size, from a four-inch type to a twenty-seven-inch automatic coin-operated box, perfectly sized for anything ranging from living rooms to bicycles. Between 1892 and 1920, the company produced roughly 100,000 music boxes, with increased competition from the phonograph eventually forcing the company to diversify. At any rate, the Regina Music Box Company is credited with bringing mechanically produced music into American homes, and apparently to bicycles as well! The musical bicycle was not resounding success, but in terms of vision, far ahead of its time.