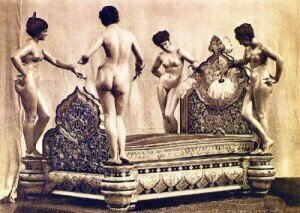 We’ve all heard of musical chairs, a game of elimination involving players, chairs, and music. With one fewer chair than players, when the music stops the player who fails to sit on a chair is eliminated. A chair is then removed and the process repeated until only one player remains. So far so good, but have you ever heard of the musical bed? The object actually existed, but I can tell you that it was certainly not a game! In 1882, Sadiq Muhammad Khan Abbasi IV, Nawāb of Bahawalpur, anonymously commissioned a bed in rosewood covered with about a third of a ton of chased and engraved sterling silver from La Maison Christofle in Paris. The Nawāb was very precise in his design specification, calling for a bed of “dark wood decorated with applied sterling with gilded parts, monograms and arms, ornamented with four life-size bronze figures of naked females painted in flesh color with natural hair, movable eyes and arms, holding fans and horse tails.” 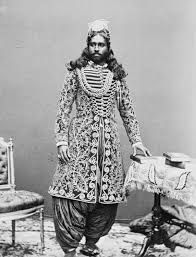 Christofle had been manufacturing silver flatware and home accessories since 1830, and he was rather happy to take on such a massive account. It took almost 290 kilograms of silver to decorate the bed, and the four life-size automatons represented women from different parts of Europe. Sporting different skin-tones and hair colors—courtesy of finely crafted wigs and flesh colors—the nudes are said to represent France, Spain, Italy, and Greece. What an incredible bed, I hear you say, but what about the music? Well, the nude bedposts were powered by individual spring mechanisms in their pedestals, and wires ran from these springs to a music box under the bed. The entire mechanism was linked to the mattress, and downward pressure activated the music box and caused the bedpost-women to be set in motion. So when the Nawāb took to his bed, the automatons fanned him and apparently winked at him as well. And all that to about 30 minutes of music from Gounod’s Faust!