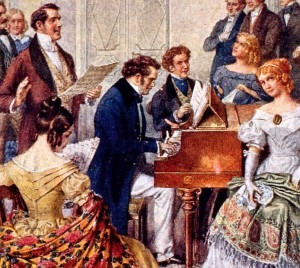 The Art Song, also known under the German title “Lied” refers to a musical setting of a poem for solo voice and piano. Significantly, the art of romantic song resides as much in poetry as it does in music. Almost always, composers of the nineteenth century chose preexistent poetry to be set to music. Depending on the degree of sophistication implicit in the poem, the musical treatment might be subordinated, allowing the poetry to dominate. In many cases, however, the music interprets and reshapes the poetic meaning. Although the subjects that appear in song poetry are quite diversified, certain themes emerge repeatedly. Foremost among them is love, the eternal subject of songs of all types and all ages. Poetry in praise of the beauty of nature is frequently encountered, and often used to depict aspects of the poet’s inner emotional life. And let’s not forget that the piano part rose in status to equal partner in illustrating and intensifying the meaning of the poetry. The expression of emotion through poetry and music in the most intimate of settings places enormous demands on the singer and the pianist. The degree of intimacy “seldom equaled in other kinds of music requires that the two performers communicate to the audience the most subtle and evanescent emotions.” And in this episode, we look at some of the most characteristic male Lieder voices of the 20th century.

Hans Hotter (1909-2003) enjoyed a thriving operatic career, embodying the great Wagnerian bass-baritone roles of Wotan, Gurnemanz and the Flying Dutchman. He was handsome and tall—standing almost 2 meters in height—and he was strikingly suited for the operatic stage. In addition, the quality of his voice and his refined musicianship won him critical admiration from Clemens Kraus and Richard Strauss. However, Hotter’s true love of singing found perfect expression in his Lieder interpretations. In spite of his enormous voice, he was uniquely able to condense his vocal intensity into a velvety and almost delicate timbre, expressing the meaning and feelings of the words without ever sacrificing the melody. In more than one way, Hotter was a true Giant!

Herman Prey’s (1929-1998) voice had a wonderful virtuoso agility. His clear and polished tone—particularly prevalent in the darker and deeper-sounding range of his voice—was capable of reaching into the tenor register without the smallest suggestion of vocal effort. Nevertheless, his mellow and lyric baritone was capable of robust projections that also provided for an active career on the operatic stage. However, his voice was ideally suited to the art song, and a critic once wrote “his Schubert singing does not twist sound for pictorial or dramatic effect but instead creates, with unusual musical clarity and purity of tone, a narrative voice which, though concerned and moved, tells the story first and lives it only indirectly.”

In Berlin, in the two decades immediately preceding World War I, there was a Lieder craze, “an epidemic,” as the composer Hugo Wolf called it. And it was Austrian tenor Richard Tauber who brought Schubert Lieder to the new medium of the cinema in the years before World War II. Roughly 50 years later, the English tenor Ian Bostridge, who has been immersed in Schubert Lieder for most of his life, brought Schubert to the pop video screen! Bostridge is essentially the archetypal English tenor, with a flexible and agile voice of exceptional clarity. And it was his interpretation of Schubert’s dark, brooding and harrowing masterpiece Winterreise that established Bostridge as one of the finest Lieder interpreters of his generation. It is his deep appreciation for narrative and theatrical potential that makes Bostridge’s presentation so seductive. Being fully conscious of the psychological implications and poetic nuances of the text, Bostridge is uniquely capable of vividly expressing the strange, cryptic and emotionally complex subtexts of Schubert’s Lieder creation.

Trying to come up with a list of the Top 5 male interpreters of the Lied is always going to be tricky. One could, without hesitation include Fritz Wunderlich, Peter Schreier, Gerard Souzay, Matthias Goerne, Thomas Quasthoff, Thomas Hampson and various other wonderful performers. However, since lists of this nature will always be subject to individual tastes and preferences, I have decided to include Kurt Moll (1938-) in this short list of musical giants. Moll has the most remarkable and deeply moving voice, widely known for its true infra-bass range. This simply means that his vocal range extends far below the “basso profondo.” Reaching to the glorious depths of the contrabassoon, Moll’s voice, capable of the most amazing relaxed vibrato, still retains a smooth and velvety quality. With such a large instrument at his disposal, Moll would have been seemingly predestined for the large Wagnerian bass roles. However, he never sang Hagen, Hans Sachs nor Wotan, but instead also placed his incredible organ into the service of the Lied. His restrained and intelligent interpretations are simply phenomenal, and death has never sounded so profound!

No matter how you twist and turn it, Dietrich Fischer-Dieskau (1925-2012) was the pre-eminent interpreter of art song in the 20th century. Dubbed “Le miracle Fischer-Dieskau,” he seemingly had it all; highly characteristic and beautiful vocal quality in every range, incredible breath control, flawless sense of rhythm, extreme versatility and precision, and probably most famously, a highly perceptive insight into the idiom of the Lied. Essentially a lyrical and introspective singer, Fischer-Dieskau was uniquely capable of drawing the listener into the essence of song. Seamless shifts in dynamics and infinite shadings of coloration and character brought his interpretations towards expressing the primordial aesthetic of the Lied; “Music and Poetry have a common domain, from which they draw inspiration and in which they operate; the landscape of the soul.” Of course, Fischer-Diskau has had his jealous distractors, but fact is, he was the dominant male voice of Lieder in the 20th century.