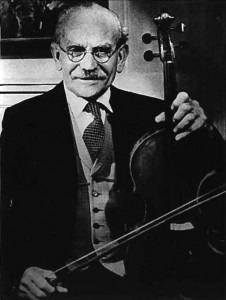 Sadly the viola has been unjustly maligned. The following five consummate violists have put the viola on the map as a solo instrument, and without them we wouldn’t have the outstanding world-renown players we hear today.

Lionel Tertis (1876–1975) one of the first viola players to achieve worldwide recognition, became an indefatigable advocate for, “the love and tyrant” of his life. At the time, Harold in Italy by Hector Berlioz was one of few viola solo works that was well known. Even Mozart’s gorgeous Sinfonia Concertante for solo violin, viola, and orchestra was not programed frequently. That changed with Tertis, whose expression, resonant sound and finesse established the viola as a versatile solo instrument.

His first music lessons were on the piano. By the time he was twelve, his love for the violin surpassed the piano but he had to earn a living, pay for lessons and purchase a violin. He found odd jobs as a pianist whenever he needed money. At last he was able to enter Trinity College of Music and then the Royal Academy in London. Determined to prove that the viola could sound wondrous in the high registers he performed the Mendelssohn and Wieniawski violin concertos (transcribed for viola) during his school years. Later he even wrote a transcription of the Elgar Cello Concerto for viola approved by Elgar.

He was appointed professor of viola at the Royal Academy of Music in 1900. Tertis soon became a member of two famous string quartets, and was in demand as a performer with the eminent musicians of the day—conductors Adrian Boult, Thomas Beecham, violinist Eugene Ysaÿe, pianist Arthur Rubinstein, and cellist Pablo Casals. Tertis “fell in love” with Fritz Kreisler’s playing with whom he performed Mozart’s Sinfonia Concertante.

Interestingly enough, in 1929, Tertis declined to perform the premier of the Walton Viola Concerto, although it was written for him. The composer Paul Hindemith, an excellent violist, did the premiere. (Hindemith wrote several exceptional works for the viola.)

Tertis wrote his autobiography My Viola and I towards the end of a long and illustrious career. 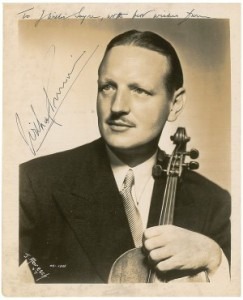 William Primrose was born in Glasgow in 1904. He began music lessons on the violin and made his debut at the age of 10. Primrose studied in London with the great Belgian violinist and teacher, Eugene Ysaye and although Primrose was becoming a prominent violinist, Ysaye suggested he switch to the viola. Primrose was hooked. During his long career he became known for his pure, sweet tone, and astounding technique— the kind of clarity and dexterity that audiences were accustomed to on the violin.

Primrose excelled in every arena—as a soloist, chamber musician, orchestral player and professor. He commissioned many viola works, those of Hindemith, Britten, Milhaud, Walton, and gave the premier of the Bartók Viola Concerto. Primrose was the soloist in the first recording of Berlioz Harold in Italy in 1944.

To prove that the viola could be dazzling technically, he performed the Paganini Caprices on viola. Violin soloist Mischa Elman was stunned. “It must be easier on viola!” he said. Primrose transcribed several virtuoso works for the viola. One of them was from Paganini’s Concerto No. 2. La Campanella.

In the early 1930’s Primrose toured with the London String Quartet and performed as soloist. Arturo Toscanini recruited him in 1937 to head the viola section for the NBC Symphony. During his years in the orchestra, he formed the Primrose Quartet and made several memorable recordings with Heifetz, Piatigorsky and Rubinstein.

His teaching took him all over the world— to the Curtis Institute of Music in Philadelphia, the Aspen Music Festival, the University of California in Los Angeles, Indiana University, the Tokyo University of Fine Arts and Music in Japan, where he lived for several years, and lastly at Brigham Young University.

Primrose is the author of several volumes on viola technique and a delightful memoir Walk on the North Side. He has left us a remarkable discography and for his contributions to the recording industry he was awarded a star on the Hollywood Walk of Fame. 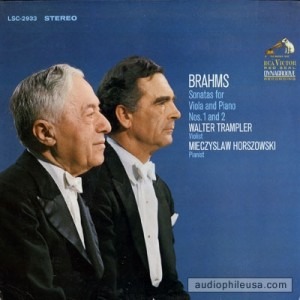 Walter Trampler, born in Munich in 1915, was also impressive in solo playing, chamber music and teaching, and he made a huge impact on viola playing throughout his decades long career. A stylish and elegant European, he dedicated himself to both the standard repertoire and to contemporary music. He recorded extensively and his distinctively sonorous sound and polished interpretations can be heard today.

Trampler began his studies on the violin with his father. By the age of eighteen he was appointed the principal violist with the German State Radio Orchestra in Berlin. There he was able to rub shoulders with notable conductors including Richard Strauss.

Vehemently opposed to Fascism, Trampler immigrated to the United States in 1939 as the political climate turned towards Nazism. He quickly won a position with the Boston Symphony under the direction of the eminent maestro Serge Koussevitzky.

Trampler joined the New Music Quartet, the Yale Quartet and later was a founder of the Chamber Music Society of Lincoln Center. Trampler was also the Juilliard and Budapest Quartet’s preferred guest artist. His recordings of the Mozart and Brahms String Quintets with the Budapest Quartet are among the greatest interpretations.

Several important composers of the twentieth century wrote works for him including Hans Werner Henze and Luciano Berio. His recording of Chemins II on RCA is memorable. It is an exceptionally arduous work with constant tremolo in the bow arm—the rapid back and forth movement, which results in a shimmering effect, and a very tired player!

Trampler continued his appearances as soloist while also teaching at many of the most prestigious music schools including Juilliard, Boston University, Yale School of Music, Peabody Conservatory and the New England Conservatory.

In 1977 Trampler gave the first performance of the Sonata for Viola and Piano, op. 147 by Dmitiri Shostakovich. It was still an unfamiliar work even among violists at that time. Trampler became an eloquent proponent, often entering into discussions about the intentions of the composer. It is said that Trampler’s interpretation convinced even Primrose. Another recording worth noting is of the two Brahms Sonatas with Mieczyslaw Horszowski. What a sound! 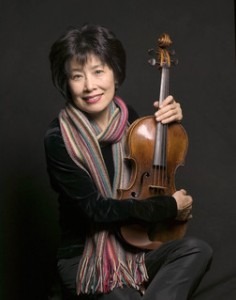 Japanese violist Nobuko Imai studied at the Toho School of Music, Yale University and the Juilliard School and became an award winner at both the Munich and Geneva International competitions. She initially established herself as a member of the well-regarded Vermeer String Quartet. Now she travels widely performing as a soloist and teaching at prominent music conservatories such as the Academy of Music in Detmold, the Conservatoire Supérieur de Musique de Genève and the Conservatory in Amsterdam.

The rigorous training Imai received as a young child heavily influences her teaching today. Based on the strict technical approach of Russian violinist Leopold Auer, Imai was immersed by the age of ten, in 1953, practicing at least one hour a day of scales, endless repetitions of double note exercises, and the most demanding etudes. It was not until she was accepted into the Toho School and switched to viola at age 15, that she was encouraged to focus on the variety of rich, deep tone colors and sounds available to her. She began to flourish. Still, Imai believes that her technical ease is due to the solid foundation, which she acquired on the violin.

Her comprehensive discography of more than 40 albums includes works written for her such as A String around Autumn by Japanese experimental composer Toru Takemitsu, and premiers of pieces by George Benjamin and Duncan McTier. Extraordinary as it may seem, Imai’s album of 20th century works for viola and piano has become a bestseller in Japan.

But Imai is also dedicated to early music performance practice. She reinstated the use of the Baroque bow in an attempt to reproduce sounds as the composers of the day intended. Her 2004 release of the Bach Cello Suites is widely praised and they are beautifully played, as if written for the viola.

Despite her busy performance schedule as a soloist and chamber musician, Imai continues to devote herself to propagating a comprehensive approach to viola playing and music. She founded the East West Baroque Academy where young musicians study authentic approaches to early music. She is an Artistic Adviser of the Casals Hall’s annual “Viola Space” project and the Casals Hall Ensemble, and she also established the Tokyo International Viola Competition.

Nobuko Imai cautions that brilliant playing is not the ultimate goal. Whatever you do, she says, make the viola sound like a human voice.

Nobuko Imai plays BACH, J.S.: Courante from Suite No 2 in D minor
Prelude to the Suite No 3 in C major 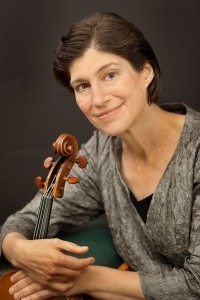 Armenian-American violist Kim Kashkashian, born in 1952, yearned to play the clarinet as a child but the family had ready access to a cousin’s violin. She borrowed a viola while attending the Interlochen Arts Academy and never looked back.

Kashkashian studied at the Philadelphia Musical Academy with Karen Tuttle, and followed in the footsteps of Walter Trampler with whom she studied at the Peabody Conservatory in Baltimore. She developed her trademark glorious sound—lustrous, pure, passionate and with boundless ease at the instrument. Kashkashian became a dedicated teacher herself, taking on important positions at the Mannes College of Music in New York, Indiana University Jacobs School of Music in Bloomington, the Freiburg Hochschule für Musik, and the New England Conservatory in Boston.

A frequent chamber music performer and co-organizer of the Marlboro Music Festival festival with violinist Felix Galimir, Kashkashian was acutely aware of the viola’s limited repertoire. She set out to prove that there was a place in the spotlight for the sadly neglected instrument. Like so many other artists, Kashkashian decided to try her luck as a soloist by way of the competition circuit in Europe, mainly for the performance opportunities, which for a solo violist were few in the U.S. Her awards led to as many recital and concerto appearances as she could fit in, (while at the same time be a good mother to her daughter), affiliations with concert venues, International music festivals in Europe and to a relationship with Germany’s ECM Records, which continues to this day after more than three decades of recording unique repertoire.

Kashkashian became a proponent and advocate for the music of our time. An impressive number of composers have written works for her including Arvo Pärt, Krzysztof Penderecki, and Sofiya Gubaidulina. One of her highly regarded records features an all-Hungarian program with the Netherlands Radio Chamber Orchestra under the direction of Peter Eötvös, of Bartók’s Concerto, Kurtág’s Movement for Viola and Orchestra, and Eötvös’ Replica, which was written for her. Her album Kurtág and Ligeti: Music for Viola won a Grammy in 2012.

A truly unique voice on the viola, she continues to be in demand at chamber music festivals in performances with illustrious colleagues, and is a tireless advocate for her instrument and for music. But that’s not all. She is the founder of Music for Food an organization that believes in the power of music to effect change. Musicians use their talents to serve their communities and to try to alleviate hunger in their local neighborhoods. Over 250,000 meals have been provided to date.