Composers Inspiration
The Poet for the Modern Age
by Maureen Buja October 22nd, 2016 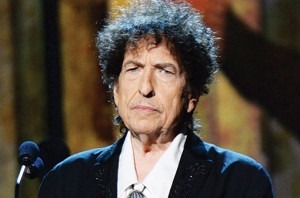 Of the earlier Nobel Prize winners, many of them have had their poetry set to music, starting with the very first prize-winner from 1901, Sully Prudhomme, as in this setting by Henry Duparc of his poem ‘Soupir.’

Duparc: Soupir (Paul Groves, tenor; Roger Vignoles, piano)
The 1903 winner, Bjørnstjerne Bjørnson, had his poetry set by Edward Grieg; the 1906 winner, Giusuè Carducci was set by Alfred Casella; the 1907 winner, Rudyard Kipling, was set by composers as varied as Luigi Dallapiccola and Charles Ives, and made it into the popular repertoire with his Barrack-Room Ballads.

McCall: Boots (Michael Halliwell, baritone; David Miller, piano)
And that’s just looking at the European poets. When we look at the Indian poet Rabindranath Tagore (1913 winner), his poetry has inspired composers from Mikhail Ippolitov-Ivanov to Leoš Janáček to Christopher Rouse.

Janacek: Potulnú šíenec (The Wandering Madman), JW IV/43 (Moravian Teachers Choir; Lubomir Mati, cond.)
Let’s jump up to Dylan. You may know him solely through his own music or through other popular performers, such as Jimi Hendrix, performing his music, but there are also classical composers who have taken him as inspiration. How about ‘All Along the Watchtower’ as set by John Corigliano, as No. 5 in his 7-part collection Mr. Tambourine Man?

Corigliano: Mr. Tambourine Man, No. 5: All Along the Watchtower (Hila Plitman, soprano; Buffalo Philharmonic Orchetra; JoAnne Falletta, cond.)
Settings such as Corigliano’s make us set Dylan’s music aside and reconsider the poetry, just as Corigliano did when he set it. And just as the Nobel Committee did when they awarded him the prize for Literature.