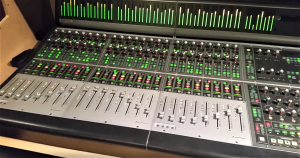 Something that music teachers and composers could learn from people who mix and master music for a living is that music is the rule.

Knowing the rules of music is as equally important as knowing the feel of music. Fine furniture makers can run their hand over a carved component of a chair and know whether it is right or wrong. A spray painter can look at a coated surface and tell if the paint is evenly applied. The shoe designer knows that a shoe not only has to look good it has to feel good.

Which brings me to Bach. The main reason I have never warmed to most of the music of JS Bach is because to me, it lacks feeling. Heresy I know, but to me, Bach’s music does not feel like the other music that I love. There is some sublime music from the mind of Bach, but I find there is little that comes from a human heart, it’s just too exact.

The main issues I have, and some musicians have with Bach is that there is not a lot of space to breathe when playing or listening to his music. This is something wind players know well when performing an all-Bach concert. It is unclear when the breath mark, a comma, telling a wind player when to breathe was introduced into music notation, but I’d guess that it was just after Bach’s time; ask any oboist who has to play his oboe concertos about the difficulties of getting through one of his works. I’m sure wind players were writing in breath marks on their Bach scores and it caught on.

This brings me to jazz. Is jazz the most human, the most subtle, persuasive and feeling orientated music of all genres? You might guess that my answer is yes.

People have transcribed Bach into jazz, and it misses the point of jazz. Any genre of music can be transcribed into any other genre, because as Bach shows all too well that music is maths. Whatever musical genre you love, it is just an equation away from another genre. As can be heard in Dimitri Naïditch: Bach, Concerto in A Minor [in Jazz].

Chilean jazz vocalist Claudia Acuña says, “If I can’t feel it, I don’t want to sing it.” And this is the whole point of music in my opinion. Music is not made, or should not be made to be heard, or as some academic process, music should be made to be felt. Jazz musicians put their whole lives into their performances, and you can feel that in so much of jazz music, unless it has been manipulated out.

The recorded music that you and I hear has a lot of editing gone into the finished product. Hopefully, that treatment of music is for the better. The close listening that goes on in a mixing and mastering studio is more like a deep inspection of the sound qualities of music. The blending of tones, subtle reverberations, the equalisation of parts and adding delays, compression and filters are all part of what is involved in producing a song. It’s an art form equal to that of composition and performance.

While most rock and pop songs have been maxed out in recording studios today, just compare a waveform of music today as to that of the 1960s, classical music does not get treated this way.

No one wants recorded classical music at the same volume all the way through. People want and expect to feel a difference in the dynamics of classical music. The varying levels of expression that goes into almost all classical music is one of its major draw cards.

From the full-on thunderous fortissimos of a tutti orchestra to the shimmering almost silent sound of a solo cello in a pianissimo passage in a slow movement, classical music breathes. It has colour and variation. The depth, grandeur, and subtleties contained in classical music are or should be, the rule of music, and these things should be taught in schools. Verdi’s requiem is a piece that contains almost every emotion and it’s a powerful reminder of what life and death feel like. Are they studying pieces like this in music schools?

Music education is bogged down in technicalities. Some music schools are still caught in the academic trap of the processes of serialism. There are things to be learned and used from this technique, but it’s not the only thing as it is in some schools.

Music is about feelings. There are few feelings found in the explanation of something. The experience of something is where feelings live. Music should be the rule of music. Simply studying the techniques of music will not produce good music that people want to listen to.