The National Gallery of Art in London holds art from the mid-13th century up to 1900 – other collections in London hold other varieties of art: sculpture and applied art are at the Victoria and Albert Museum, The British Museum has earlier art, non-Western art, and prints and drawings, while art after 1900 is at the Tate Modern while the Tate Britain holds the National Collection of British Art.

Looking through the collection for paintings that include music, we have a range of images from the 1530s to the 1860s that use music, usually in the form of musical instruments, to show something about culture and society.

The first work is Hans Holbein the Younger’s painting of Jean de Dinteville and Georges de Selve, who were attending the court of Henry VIII. Jean de Dinteville, on the left, had been sent by King Francis I of France to look at the situation of the Henry’s court while Henry was fighting with the Vatican for annulment of his marriage to his first wife, Catherine of Aragon. The figure on the right is Georges de Selve, Bishop of Lavaur, a close friend of Dinteville. Between them is a virtual still life of instruments of all kinds: the top shelf is filled with scientific instruments to measure the positions of stars and planets and an 8-sided sundial; the bottom shelf, holds items of musical interest: the largest is a lute (with its case under the table, on the floor), to the right is a set of flutes in a case, and the book under the lute is a Lutheran hymn book. The messages in the musical instruments indicate a lack of harmony between formerly Catholic (now Anglican) England and Catholic France. The lute has a broken string, one of the set of flutes is missing, and the music book, which has been painted so finely, that it can be read, is open to two hymns that would not be next to each other in any standard hymnal.

What’s of greatest interest in this painting is the distorted figure on the floor between the two men. Viewed from the bottom right corner of the painting the image resolves into a skull, something that will be seen in other still life paintings. Amidst all of this wealth is a memento mori. 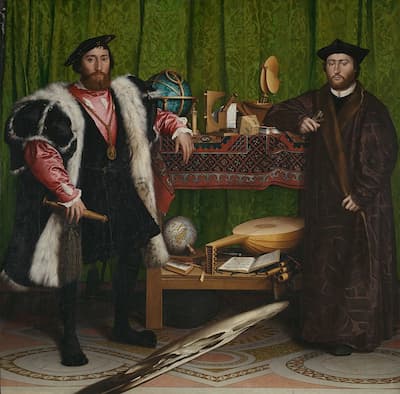 Henry VIII (King of England): Alas, what shall I do for love? (Sirinu)


A painting from two years later, 1535, possibly by Titian, shows The Music Lesson. This can be read in an angular shape. At the bottom right, a young boy is singing from a partbook while the music master in green beats time with his finger. The young woman on the left both listens to the boy and looks out at the viewer. The man in red in the center is also looking at the partbook and is playing a 6-string viola da gamba, but in an unusual position, as the instrument is normally played while seated, being placed between the legs. The boy in the green hat plays a recorder without looking at the music. The music teacher is thought to be Nicola Maffei, a count in the court of Mantua. He was known to commission works and he was an avid collector of art. He commissioned Titian’s Supper at Emmaus and was in frequent correspondence with Titian.

A partbook was how Renaissance music was sold. Each voice part would have a separate book and there would not be a score as we know today with all the parts together. Keeping time was essential because no one performer had an overview of the entire piece. The partbook has not been painted in such a way that the music can be identified but the message of instruction of the young and of different musicians working together all contribute to a suggestion of a story. 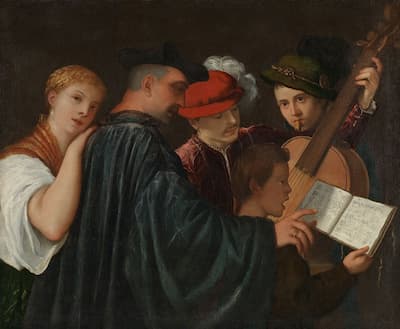 
The activities of mythological gods were subjects that never grew old. In a series of frescos painted on the walls of the Villa Aldobrandini in Frascati, the Italian painter Domenico Zempieri, known by the diminutive Domenichino, painted 10 frescos, all based on stories involving the god Apollo. Those with music references include The Flaying of Marsyas, the satyr who failed in his foolish wish to challenge Apollo to a musical contest, The Judgement of Midas, where Apollo was unsuccessfully challenged by Pan to another musical contest where Midas sided with the losing side and gained his donkey’s ears, Apollo with the Head of Orpheus, and Mercury stealing the Herds of Admetus guarded by Apollo. In the last one, Apollo, who had been sent to guard Admetus’ herd, sits with his back to the herd. This is a critical point in the life of Apollo. Here, he’s shown playing a pipe, not his usual lyre. The child Mercury, on the day he was born, invented a 7-string lyre based on a tortoise shell and stole 50 cattle from Apollo’s herd. Caught, he had to return the stolen animal and sang a song to Apollo using his newly invented lyre. Apollo thought the music was an apt exchange for the theft and Mercury presented him with the lyre that became Apollo’s symbol from then on. In Domenichino’s painting, Mercury can be seen at the back of the herd, urging them down the hill as Apollo is caught up in his music. 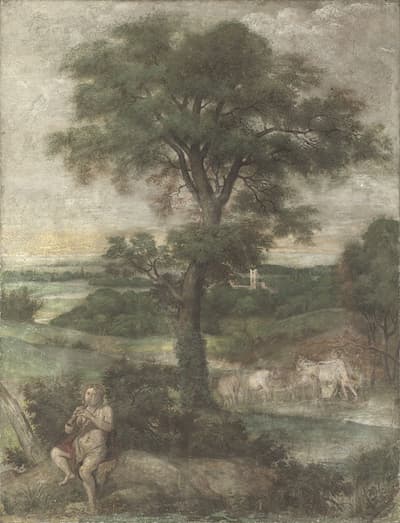 
It’s 1635 and we’re in a gloomy tavern. At the low table, a man in blue and yellow minstrel’s outfit plays a lute while sitting on an overturned tub, his foot propped up on two books. The old woman next to him holds up a sheet of paper, perhaps sheet music, and may be joining him in song. Behind her a man leans over her shoulder, perhaps another singing voice or maybe just an onlooker. On the table are two partbooks, one marked ‘BASO’.

Although the description of the various musicians tries to connect them, this doesn’t seem very likely. The lutenist isn’t playing his instrument but looks like he’s tuning it, given that his left hand is on the tuning pegs rather than on the strings. He’s also not looking at the other two potential performers but listening closely to his instrument. The woman isn’t sharing the music, if that’s what’s on the paper, with him and the man in the red cap seems to have his mouth firmly closed. It looks more like she’s reading a letter to the lutenist while the man in the red cap listens in. Viewers can make up their own story based on how the images are read. 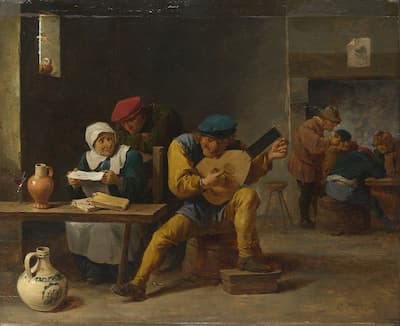 John Marston: The Dutch Courtesan, Act I: The darke is my delight (Custer LaRue, soprano; The Baltimore Consort)


The still life as a genre was a place where time and culture could be captured, and the viewer could interpret their meaning for centuries. In Vanitas Still Life by Jan Jansz. Treck, painted in 1648, things are turned upside down: the helmet lies on its side, the visor open, seemingly being attacked by the long stem of the pipe, which has turned sideways, dumping a burning ember onto the table. You can trace a virtual circle from the head carved on the viol, looking away from the viewer, down to the skull turned on its side, to the little recorder intertwined in the hourglass, to the oyster shell and the straw for blowing bubbles, and then to the drawing of the man who’s shown upside down. The beautiful silk scarf with its silver and gold threads is careless thrown down and covered with the detritus of a life. Musically, the recorder seems abbreviated, and the viol’s bow is buried under the helmet and other things on the table. The music book is in danger from the soapy solution in the oyster shell. All of these things are valueless in the face of death is the message – like a musical note or a soap bubble, it all disappears. However, the irony, of courses, is that all this transience is preserved forever in this painting. 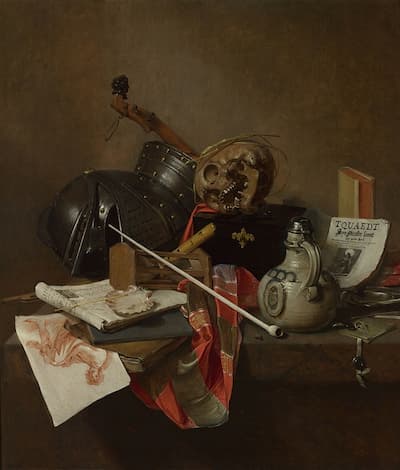 
English artist Thomas Gainsborough made his name in portraiture and landscape painting, as well as being a draughtsman and printmaker. As one of the most important British artists in the second half of the 18th century, he was in great demand as a portrait painter but after many years of this, he declared he’d rather run away and just play his viola da gamba and paint landscapes. Incidentally, Gainsborough owned 5 viola da gambas.

In 1777, Gainsborough painted his youngest daughter, Margaret at age 26 with a theorbo. Margaret was considered the more musically proficient of Gainsborough’s two living daughters. The other daughter, Mary, played the harpsichord. Margaret is shown dressed very fashionably, with her hair piled high and powdered, in the style of the day. The work is incomplete and was dashed off in Gainsborough’s speed style of capturing a subject. 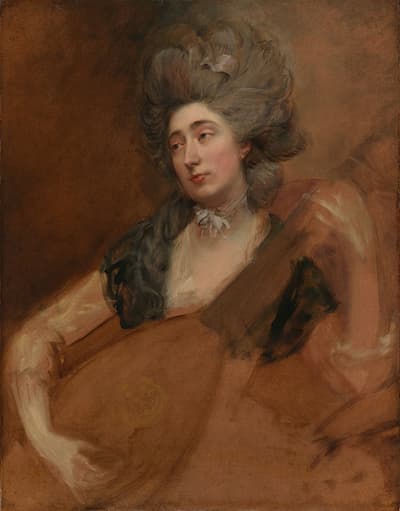 
We leave the National Gallery with a work where music is in the title, but not apparent to the eye. Edouard Manet’s Music in the Tuileries Gardens of 1862, has been described as ‘the earliest true example of modern painting in both subject matter and technique.’ It captures contemporary life in Paris and, more importantly the 19th century importance of urban leisure. Concerts were given twice weekly at the Tuileries Gardens. Tucked in the picture are Manet and his family and friends. Manet is at the extreme left, holding a cane and perhaps a brush, half hidden behind another man with a cane, the painter Comte Albert de Balleroy, with whom he shared a studio. To the right of the picture a man with glasses and a moustache is seated under a tree – this is the composer Offenbach and in front of him stands Manet’s brother Eugène in white trousers and a top hat. Also in the picture are the artist Henri Fantin-Latour, and the writers Théophile Gautier and Charles Baudelaire.

The audience is dressed in high fashion. This isn’t a detailed image; there’s no central vanishing pint and the faces are obscured and mostly out of focus. This is an impression of a gathering. The concert is about to start and the crowd has turned to look at the performers, who are behind the invisible artist. 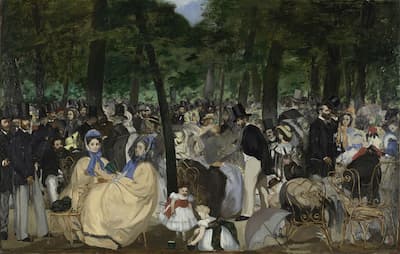 
In all these pictures, various aspects of music have been captured: music as representative of a cultured life, music as a distraction, music as a way of bringing generations together, and, in the end, music as something to be heard but not necessarily seen.