In Tune Society
Where has the Music Gone?
by Maureen Buja February 26th, 2015 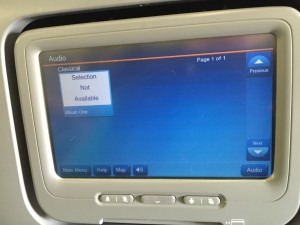 As I settled in for my million-hour flight from Chicago to Hong Kong, I eagerly scanned the audio channels to see what was scheduled for the classical section. Hmmm, no contents list for the playlist in the magazine, so I turned on the audio selection and found that there was, in fact, nothing scheduled. No classical music at all. Lots of K-Pop and J-Pop and western Pop and the like, but no classical.

I could understand it if this was a minor low-budget airline, but this was a major American airline (United). On a major long-distance route. The opportunity for using classical music for one of its major roles in life, entertainment, was lost. And, no music at all was worse than bad musical choices.

Other travelers have reported disappointing playlists on their recent trips as well. I love the chance to sit, undisturbed, and actually listen to music. I don’t have to watch things being blown up on the movie channels, or attempt to play approximations of real video games, I can take the time to appreciate the skill and innovation of a composer.

What I admire is cleverness in the classical channel: music that responds well to a surface listening but which is also rewarding on a deeper level. Sometimes the musical choices are the old warhorses: a bit of Beethoven’s Symphony No. 6, some Mozart piano music, some Tchaikovsky ballet works and, at other times, the programmer has been clever. Music related to flying, such as Vaughan Williams’ The Lark Ascending, or to the season, such as selections from Vivaldi’s The Four Seasons at the appropriate time, always cause me to appreciate the programmer’s choices. True innovation, however, comes when the programmer can make each piece of music relate to the next and for you, as the listener, to find an overarching design.

Now I’m back to travelling with my own music. For those long flights, program a bit of chamber music that makes you admire the interplay between voices or program symphonies that allow you to listen to the something that in the busy everyday world is too complicated to concentrate on. I find that vocal music is difficult to concentrate on, although if it’s a familiar opera or song cycle, things are a bit easier.

Bring back culture to the air – bring back classical music. When we have the time to listen, we need the music to listen to!