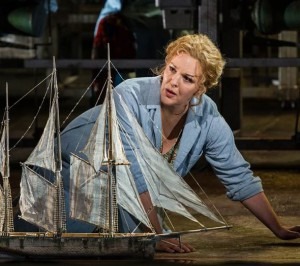 Richard Wagner’s Der Fliegende Holländer (The Flying Dutchman) is an opera with unusually extensive chorus segments. And Director Tim Albery’s production at the Royal Opera House puts the chorus to unusually good use. Enthusiastic, dramatically intense and vocally polished, this chorus lit an explosive spark to an already supercharged set and performance.

The current Fliegende Holländer, a revival of the 2009 production, still manages to chill the audience with its images of desolate ship hulls leading nowhere and factories that look like Stalinist planned production factories. It’s overarching theme of loneliness and redemption through loyalty are born out in every scene with unsettling effect. The (real) rain ditch at stage front is skilfully deployed as atmospheric dampener and as a wet playground for the chorus in the seamen’s chorus scene, where the Steersman played by Ed Lyon puts on a wet T-shirt show that actually fits the music and scene. 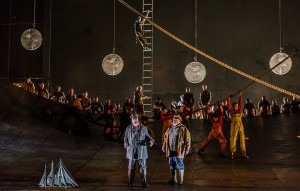 Welsh superstar baritone Bryn Terfel was much advertised as the Dutchman, but in the performance attended by your correspondent, Terfel was missing due to illness. He was replaced by Egils Siliņš who had already sung the part in the original production (subbing Terfel) and was again recruited, this time at short notice. The Latvian (what is it about Latvia that the tiny Baltic country produces so disproportionately many great singers?) possesses a smouldering warm baritone that he deploys with skill, though a touch more legato or colouring wouldn’t hurt. It is refreshing to see a young and handsome Dutchman rather than the more habitually portrayed beardy, old and creepy-looking ghost captain. Siliņš makes it believable that Senta be attracted to him not just on account of loyalty. 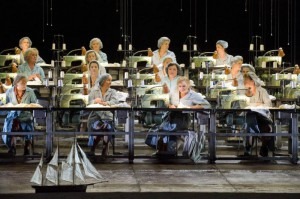 Adrianne Pieczonka delivered a Senta to remember. Visually attractive, playful and passionate, she displayed intelligent vocal handling, deploying her stunning soprano with sensitivity and warmth until unleashing its raw and voluminous power like a slingshot. Assured and precise.

The orchestra of the Royal Opera House under Andris Nelsons (another Latvian!) comfortably delivered the full impact of Wagner’s thrilling score.