What’s your local subway system like? Like being in a tiled basement, somewhat dimly lit, and all you hear are the rumbles and screeches of the trains? In a new collaboration between the HK Philharmonic and the MTR in Hong Kong, the subway and underground trains have been filled with classical music and videos. 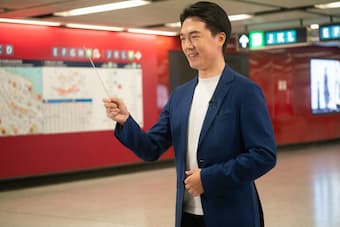 In four of the most heavily travelled stations, three are wall stickers by the Philharmonic inviting you to “Phil your MTR Ride with Music.” And, as you continue through the concourse of any station in the system, you will hear musical excerpts performed by the orchestra. The in-train videos will be showing the specially filmed video and MTR Mobile on your phone and the MTR website have more performances by HK Philharmonic musicians.

For the music video, filmed on the concourse of Central Station and conducted by Lio Kuokman, Resident Conductor of the Hong Kong Philharmonic Orchestra, they chose one of the three dance suites from On the Town, Leonard Bernstein’s 1945 ode to New York City told through the adventures of 3 sailors in the big city.

This is where the famous “New York, New York” song made its first appearance in the musical.

For music in the concourses, you might hear works by Mozart, Dvořák, Wagner or Shostakovich, which says a lot about the Philharmonic’s trust in their audience to offer such a wide range of music. 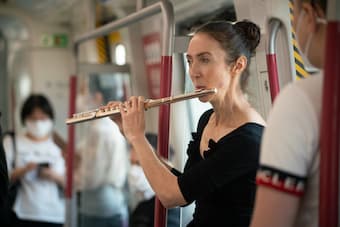 Now that you know the repertoire, how well does it work in the MTR system? Unlike the New York subway or the London underground systems, the Hong Kong system is quite young, with its first lines opening in 1974. So, instead of the small cramped dark stations of New York and London, the stations are new, expansive, and colour coded. There’s room for sound and room to listen if you just need to hear the end of the piece.

We look forward to doing the audio experiment – does The Ride of the Valkyries feel better when you’re on a down escalator or an up escalator? Does The New World Symphony make the train show up faster? Will you be dancing on the platform to Shostakovich’s elegant homage to Haydn from his 9th Symphony? We can’t wait to find out.

The “Phil your MTR Ride with Music” collaboration started on 12 March and concludes on 3 April.

What a wonderful way of bringing the concert hall to its audience.