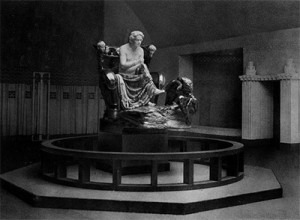 At the turn of the 20th century the great symphonic composers, Beethoven and Brahms, became symbols for artists such as Max Klinger (1857-1920), an amateur pianist, painter, sculptor and engraver. Klinger saw their music as an expression of the fate of humanity, its combination of sorrow, culpability and happiness — all within the perspective of birth and death.

Klinger’s Beethoven statue, created for the 1902 exhibition in the Secession building in Vienna, shows Beethoven sitting in a concentrated, energetic pose on a richly decorated throne. He is portrayed as a bare-chested Olympic deity with Jupiter’s heraldic animal, the eagle, at his feet — human, but achieving godlike status through his music. For Klinger, music and sculpture as well as painting are related, even though they use different means of expression and production. For him, artistic creations emerge from the artist’s lived experiences and sentiments. Subsequently, paintings, poems and compositions are experienced by the viewer/reader/listener, who projects his own feelings and interpretations onto the works, which then become the viewer’s/reader’s/listener’s own ‘lived’ experience. For Klinger, it was less the ‘idea of music’ that inspired him, but specific works of Beethoven, Schumann, and Brahms — in particular Brahms’ ‘Fantasies Op. 116’ which Brahms had based on Hölderlin’s ‘Schicksalslied’ (‘Song of Fate’). Brahms himself was very interested in poetry and painting; he felt a deep affinity between the arts despite their different media and modes of reception. For him music itself was ‘sounding form in motion’ — reaching towards the infinite and depth of human subjectivity — hence his interest in the works of Anselm Feuerbach, Arnold Böcklin, Adolf von Menzel — and Max Klinger.

Brahms: 7 Fantasies Op.116
In 1894 Klinger sent Brahms a printed copy of his graphic illustrations for the ‘Fantasies’ cycles with musical ‘opus’ numbers which had occupied him for many years. Klinger insisted that his graphic works did not ‘illustrate’ the music in the normal sense of the word, but that they provided musical interpretations of similar themes, again taking their imagery from Greek mythology, transmitting the spirit of the music. He also felt that he achieved the most dramatic range of both line and tone in his prints, etchings and engravings, since they left more to the imagination than would paintings. They encapsulated a sense, a form of indeterminacy which equaled the indeterminacy of Brahms’s music.

Brahms was very appreciative of Klinger’s work which, for Brahms, take the viewer beyond just ‘seeing feelings’, with music continuing to resonate in the infinite, expressing all that he meant and more — a universe of mystery and anticipation. In a letter to Clara Schumann, Brahms also mentioned Klinger’s graphic illustrations not as normal depictions of his music, but as magnificent, wonderful ‘fantasies’ on his texts. 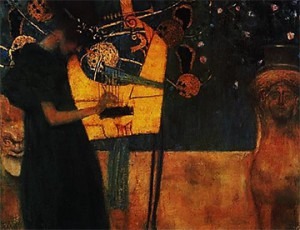 In the ensuing years, artists, musicians and writers would further base their artistic creations on the symbolic and surreal, such as Gustav Klimt with his painting ‘Music’ from 1895. Here, we see a young woman playing the kithara, instrument of the Greek Sun God Apollo, the god of music, light, order and symmetry. To the right of the young woman, Klimt depicts the man-eating sphinx; to the left, Silenius, the drunken companion of Dionysus, god of wine and drunkenness, both of whom represent the hidden instinctual, sexual undercurrents, opposing Dionysian and Apollonian forces. The influence of Sigmund Freud’s ‘Traumdeutung’ (Interpretation of Dreams), which brought psychoanalysis into public consciousness, had its effect on literature, art and music not only in Austria, but in France, Germany and Russia as well.

In future articles I will further explore this particular relationship between the arts, which will lead us to the Surrealist and Dada movements.