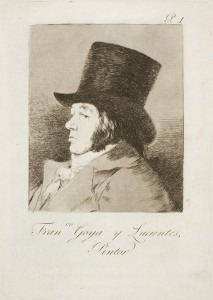 We looked earlier at the Spanish artist Francisco Goya (1746 – 1828) and how his ‘maja’ pictures influenced the 20th century Spanish composer Enrique Granados (1867-1916) to create his Goyescas.

Los Caprichos (The Caprices) were created in 1797 and 1789 and published in 1799. The light-hearted title, Los Caprichos (The Caprices) is contradicted by the dark imagery. Goya used the images to condemn contemporary Spanish society by laying bare its follies and foolishness. He rails against superstition, the ignorance and inabilities of the various members of the ruling class, the actions of the clergy, pedagogical short-comings, marital mistakes and the decline of rationality. Despite the seriousness of his criticism, his informal artistic style in the pictures keeps the set from being overly severe and foreshadows the modernist movement of a century later.

The first caprice is a portrait of the painter, shown as authoritative, well-dressed, and debonair. 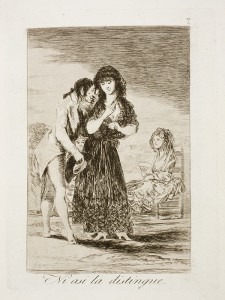 Goya: Capricho № 7: Ni asi la distingue (Even so he cannot make her out)

The music is similarly self-assured, and hides a musical motto on Goya’s name. To emphasize the formal nature of the work, we are given a 3-part fugue with a middle march-like section.

Castelnuovo-Tedesco: 24 Caprichos de Goya, Op. 195: No. 1. Francisco Goya y Lucientes, Pintor (Francisco Goya y Lucientes, Painter) (Zoran Dukić, guitar)
The problems of society and of telling a person’s position in the world comes to the fore in the picture Ni asi la distingue (Even so he cannot make her out) where the man in center of the picture cannot tell, quite, what kind of woman he is talking to. 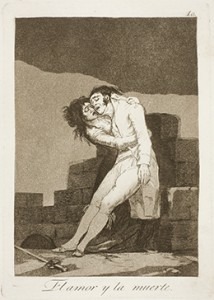 The uneasiness of the imagery is captured in the music through agitated fast music.

Castelnuovo-Tedesco: 24 Caprichos de Goya, Op. 195: No. 4, Ni asi la distingue (Even so he cannot make her out) (Zoran Dukić, guitar)
The bitter end of a duel is depicted in El amor y la muerte. A girl holds a dying man whose discarded dueling sword lies at his feet. 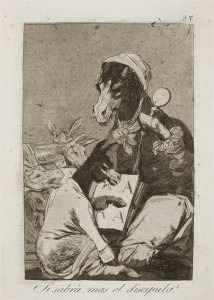 In his Tempo di Tango, the music is made of two contrasting elements: rhythmic chords (the false bravery of the duelist) and a plaintive, descending these (the grief of the woman). You can even imagine you can hear the duel going back and forth. The final bars represent the dying convulsions of the mortally wounded man…

Castelnuovo-Tedesco: 24 Caprichos de Goya, Op. 195: No. 6. El amor y la muerte (Love and death) (Zoran Dukić, guitar)
Goya’s sarcastic and biting commentary on education takes the form of a teacher and a student, but it is the student who is teaching his master the alphabet and both are donkeys.

Castelnuovo-Tedesco takes on modern music theory after a bit of braying. He starts with a twelve-tone construction in the style of the Second Viennese School before converting it all into a non-Schoenbergian Gavotte, then going on to write musical inversions and retrogrades in the 12-tone style. In addition to the Gavottes, two Musettes are added, mocking modern dissonance.

Castelnuovo-Tedesco: 24 Caprichos de Goya, Op. 195: No. 15. ¿Si sabra mas el discipulo? (Perhaps the pupil knows better?) (Zoran Dukić, guitar).
One of the most famous images from the series might actually be a self-portrait of Goya. A sleeping man is surrounded by the things of nightmares: evil owls, a lynx, and many shadowy bat-like creatures. 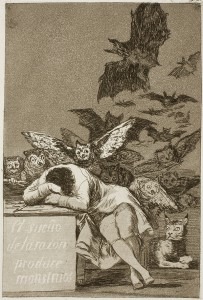 The music takes this on a variation set. The theme is a short chaconne. Variation 1 uses rapid arpeggios, Var. II is based on triplets, and Var. III put the chaconne in the base with upper voice scales. Var. 4 gives us the chaconne melody in the treble again before the last Var. is performed ‘con fuoco’ (with fire), exploring the theme in slower notes. The piece ends slowly and solemnly.

Castelnuovo-Tedesco: 24 Caprichos de Goya, Op. 195: No. 18. El sueno de la razon produce monstruos (The sleep of reason produces monsters) (Zoran Dukić, guitar)
We may not hear the monsters in the music, but the set of five variations puts us inside the tormented man’s head, as each new variation takes the same old theme and brings it around again and again and again.

Castelnuovo-Tedesco’s picture of Goya’s world through the medium of the guitar made use of an inspired choice of instrument. Each picture is a tiny world, reflecting the things Goya found in his world, and each guitar movement also creates a tiny world. In addition, the use of compositional ideas from the time of Goya (theme and variations, gavottes, and tangos) even if in a 20th-century manner, brings his world closer to ours.