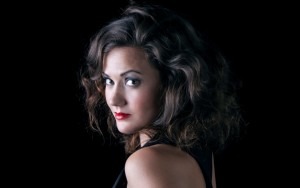 Recently returning from her Paris Opéra debut, singing La Folie in Rameau’s Platée, and finding a moment of respite before a run of Il viaggio a Reims in Zurich, soprano Julie Fuchs is building an acclaimed reputation in the operatic world.

A joint study of violin and voice quickly made it apparent that singing was Julie’s true calling. ‘I was using my singing voice since I was very young, just for fun. Instinctively. It was the best way of expressing what I felt, what I was going through and so quite early on my voice became a daily partner of mine.

‘And as a violin student at the conservatoire (in Avignon at that time), I used to see the dress rehearsals of every production at the Opera there. This made me want to sing even more.’

This natural connection from a very young age made the transition to professional life seamless. Many musicians reach a point at which they decide to commit to a life with their instrument (or voice), but for Julie it wasn’t such a defined moment: ‘I don’t have the feeling to have decided anything. It happened quite naturally. For me, opera is the perfect way to combine music and words, and I had the chance to meet the right teachers who put me on the right tracks at the right moments.’

Julie’s new album, YES!, was released this September, its eclecticism reflecting her personal playlist, which ranges from Il viaggio a Reims, through Vivaldi, through to 1940s big band era champion Dinah Shore. The early twentieth-century music featured on the album is something which proves to be close to her heart.

‘To sing the French repertoire is something important to me. I love it. It is like being home. I have also always felt close to this period (1920-1930). It’s amazing to see all the different things which happened artistically during this time.

‘That’s why, on this album, you can listen to Ravel and Poulenc, but also Weill, Honnnegger, French operetta like Messager, Hahn. There are some hits, but there’s also rare music you can hardly hear on stage these days.’

As a rising new talent, Julie is highly in demand, frequenting opera houses including Zurich, Salzburg, Lausanne, Munich, and Orange, France. What many people forget is the lifestyle that accompanies such a career. Frequent trips away from home mean that important occasions are often missed, family is seen rarely, and personal time becomes incredibly scarce.

‘This is actually exactly what I find the most difficult in my job, if I can call it a job since I love it so much… I am still discovering all the things which go with being an opera singer (the stress, sacrifices, being away from my family, friends, home…).

‘But I receive huge compensation from the productions and concerts with my colleagues and from the public. And also, I think that what could be seen as inconveniences actually drive positive changes in my life: to prioritise my time, to learn to say no, to have a healthy lifestyle. For example, I’ve even started to go to the gym 3 times a week since I have started travelling so much!’

Not only does Julie go to the gym; she also meditates and takes walks in the hills near her home in the south of France to relax. Far from being frivolous, this is something that she advocates for young singers everywhere, in a world now more competitive than ever:

‘Take care of yourself because nobody will do it for you.

‘And know yourself well: your voice, your body, your nerves, your weaknesses – but also your strengths. And be prepared to always give something!’