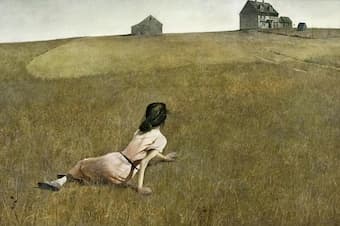 It’s one of the most dramatic of American paintings. On a large grassy field, a woman sits on the ground, turned with her back to the viewer, facing a rolling hill. Her body is twisted, her left hand in front seeking and her right hand behind pushing. Entitled Christina’s World, by Andrew Wyeth, this 1948 painting hit the world with a noticeable lack of appreciation. Luckily, it was purchased on the spot by Alfred Barr, founding director of the Museum of Modern Art, for $1,800. In the decades since its first appearance, it has become one of the most important 20th-century American paintings.

Wyeth’s image is of his disabled neighbor, Christina Olson, who had a motor-neuron disease that wasted the muscles in her legs, making her unable to walk. She didn’t want to use a wheelchair, which would have been very difficult on a farm in any case, and moved around the property at a crawl, propelling herself on her arms and dragging her legs. Wyeth said he could see her from his window. 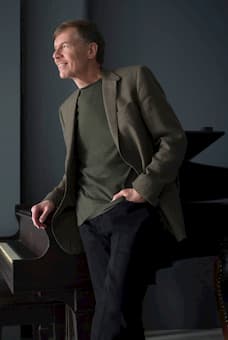 The painting is extremely detailed – viewers are drawn into its meticulous depicting of the yellowed grasses in field, Christina’s greying hair, the thinness of her arms, and the impossibly faraway farmhouse on the hill. And at the same time, there’s a beauty in the simplicity of her pink dress, the curve between the mowed and unmowed grass, and the line of the track leading to the house. Viewers can be transfixed, taking in the whole image and at the same time looking at the intense details. It’s a picture of striving and expansive spaces, of an arid landscape yet one filled with hope and movement.

The picture inspired American composer Kenneth Fuchs to set the painting to music. He says “It is her world of sea and pasture, of yearning for home, and a sense of loss and fulfilment, that I have attempted to evoke in music.” The work begins with Christina’s theme, a “long and twisting melancholy melody sung by the flute, oboe and a muted trumpet.” Another section of the work presents Christina’s hymn, a chorale sung by the cor anglais, French horn, baritones and tubas.


The work ends on an overwhelmingly powerful optimism. Christina may never walk again, but that doesn’t hold back her will, the lure of home, and the power of her spirit.

Kenneth Fuchs completed his masters and doctoral degrees at The Juilliard School and teaches composition at the University of Connecticut.

His 2018 recording on Naxos with the London Symphony Orchestra was awarded a Grammy for ‘Best Classical Compendium.’ Andrew Wyeth’s work is not the only art to inspire Fuchs. He has also written works based on paintings by Jackson Pollock (Autumn Rhythm), Robert Motherwell (Face of the Night), Helen Frankenthaler (Out of the Dark, based on three paintings: Heart of November, Out of the Dark, and Summer Banner), and Morris Louis (Point of Tranquility).