Sergei Rachmaninoff (1873-1943) spent much of his childhood and youth in the Russian countryside. For the rest of his life, he would vividly remember a childhood resonating with the beautiful and exotic sounds of ringing bells. Rachmaninoff writes in 1913, “The sound of church bells dominated all the cities of the Russia I used to know—Novgorod, Kiev, Moscow. They accompanied every Russian from childhood to the grave, and no composer could escape their influence. All my life I have taken pleasure in the differing moods and music of gladly chiming and mournfully tolling bells. This love for bells is inherent in every Russian… If I have been at all successful in making bells vibrate with human emotion in my works, it is largely due to the fact that most of my life was lived amid vibrations of the bells of Moscow…” Curiously, it was an anonymous letter from a young admirer in 1913 that reconnected the composer with the sounds of his youth. That young admirer, who turned out to be the cello student Maria Danilova from the Moscow Conservatory, sent Rachmaninoff a copy of Edgar Allan Poe’s poem The Bells. “ In the drowsy quiet of a Roman afternoon, with Poe’s verses before me” Rachmaninoff reports, “I heard the bell voices, and tried to set down on paper their lovely tones that seemed to express the varying shades of human experience.”

Rachmaninoff was not reading Poe’s verse in its original language, but in a free translation by the Russian Symbolist poet Konstantin Balmont. Balmont, who authored roughly 7,000 poems and multiple translations from various languages, was deeply affected by the gothic sensibilities and the deep fatalism in Poe’s language. He considered his version of The Bells “an adaptation, more an imitation than a translation.” 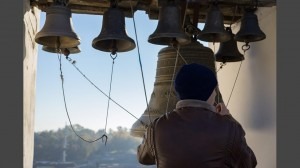 “The Silver Sleigh Bells” immediately introduce a dramatic contrast between brilliant and upbeat music verses sad, solemn and gently reassuring expressions. A silvery introduction involving the entire orchestra prepares for the entrance of the tenor soloist. The jubilant mood gradually becomes more reflective as the entire chorus wordlessly participates in the musical discourse. The cheerful mood returns once more, but this time is tempered by allusions to the Dies Irae from the Latin requiem mass. The opening of this funeral chant continues to grow in prominence throughout the work, and will brutally dominate the concluding funeral movement. The text for the second movement “hear the mellow wedding bells,” is a vision of unbridled joy and hope. However, Rachmaninoff’s musical setting paints an atmosphere of languid tranquility reminiscent of his symphonic poem Isle of the Dead. The soprano soloist initially focuses on the rapturous aspects associated with romantic love and marriage, with a glorious climactic outburst affirming this sentiment. However, this movement of sanguine beauty is once again rife with allusion to the chant of the dead. “Hear the loud alarm bells” builds a powerful picture of bells filling the air with tension, despair and even terror. This grim scherzo has variously been described “as demonic.” Lacking soloists, the chorus menacingly builds a tense, dark and dissonant musical tapestry. The mood remains unsettled throughout, and a final climax features the raging orchestra before the movement ends abruptly. “Mourning Iron Bells” is luxuriously bathed in funeral imagery and features some of the most seductive and complex musical writing Rachmaninoff ever produced. From the haunting English horn solo to transformed snippets of the funeral chant and the liturgical chanting of the baritone soloist, Rachmaninoff offers little hope. Only in the concluding pages does Rachmaninoff allow the music to escape the sense of endless grief and mourning. As the music turns to the major key, the strings finally offer some consolation, returning us to the lyrical theme first heard in the opening movement. Given its tremendous dramatic power of expression, it is hardly surprising that Rachmaninoff considered The Bells his favorite composition.

The Bells will be performed on 19 March 2016 by the Bavarian Radio Symphony Orchestra and Choi under Mariss Jansons at the Lucerne Festival.