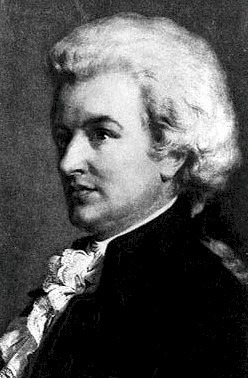 During his stay in London, Wolfi apparently composed a number of duet sonatas, that is, two players performing at one piano. They were probably intended for his personal use and included the participation from his sister Nannerl. Advertisements from 1765 confirm that the two children performed these works in public. “For the Benefit of Miss Mozart of Thirteen, and Master Mozart of Eight Years of Age, Prodigies of Nature, will perform on the Harpsichord by the little Composer and his Sister, each single and both together.” Another advert announced, “The Two Children will play also together with four Hands upon the same Harpsichord, and put upon it a Handkerchief, without seeing the Keys.” When Daddy Leopold got seriously ill in May 1765, Johann Christian Bach not only took care of both children, he also began to shape Wolfi’s musical education. Under his tutelage, Wolfi apparently composed the duet Sonata in C Major, K. 19d. This sonata was first published in the late 1780’s under Mozart’s name, but more recently, this attribution has been questioned. Be that as it may, the work nevertheless serves as an important historical document of Wolfi’s performing activity.

We will probably never know whether J.C. contributed to the little duet sonata K. 19d, but it is generally acknowledged that his most pronounced influence on Wolfgang emerged from his piano concertos. Dating from the 1770’s, J.C.’s keyboard concertos incorporate all the stylistic and formal features that enjoyed great popularity. Cast in three movements — establishing the traditional fast-slow-fast layout — these works unfold in stylish elegance. Graceful melodies and regularly unfolding phrases emphasize a harmonic vocabulary that centers on the relationship between tonic and dominant keys. In the first movement of the Op. 7, No. 5, J.C. skillfully blends the ritornello/solo structure of the Baroque concerto with the formal procedures of the symphonic allegro. His concertos, therefore, bridge the gap between baroque and classical conventions and furnished an impressive model for subsequent composers to follow.

By 1782, Mozart was finally free to pursue his dream of becoming a freelance artist in the Imperial city of Vienna. No longer relying on a regular income, Mozart began to participate in subscription concerts, introducing himself as a pianist and composer to the Viennese public. For his debut concerts of 1783, Mozart composed three piano concertos, describing their character as “a happy medium between what is too easy and too difficult…very brilliant, pleasing to the ear, and a natural, without being vapid. There are passages here and there from which connoisseurs alone can derive satisfaction; but these passages are written in such a way that the less leaned cannot fail to be pleased, though without knowing why.” The first “Viennese Concerto”, K. 414 is lightly scored and foreshadows the musical effects associated with his mature compositions. The parallels in terms of melodic construction and formal considerations to J.C. Bach’s Op. 7, No. 5—particularly in the opening movement — is indeed striking.

Wolfgang Amadeus Mozart: Piano Concerto No. 12 in A major, K.414

K. 414, however, has an even more intimate connection to J.C. Bach, as Mozart’s mentor and friend passed away in 1782. In a famous and often quoted passage from a letter of 10 April 1782, Mozart mourned the loss with the following words, “I suppose that you have heard that the English Bach is dead? What a loss to the musical world!” What is more, however, in a touching musical tribute, the second movement of Mozart’s K.414 directly quotes the theme from the second movement of J.C. Bach’s Overture to the opera “La calamita de cuori.” It has been noted “aside from some subtle rhythmic and harmonic changes to the viola and cello parts in the third and fourth measures, Mozart produced a nearly identical version of Bach’s theme, preserving even the original orchestration.”

During Mozart’s stay in London between 1764/65 he also came into contact with a number of vocal and operatic productions that undoubtedly shaped his personal theatrical language, and in the next episode we will take a closer look.