This July, Taiwan’s National Symphony Orchestra – renowned for tackling heavy German fare – switched gears to buoy Opera Australia’s mostly minimalist production of Madama Butterfly. It worked: despite being the ostensible “B” cast the evening I went, the stage’s spare surroundings and orchestra’s romantic swagger worked in tandem with a capable cast to deliver an emotional punch. This is no mean feat for a repertory standard where the arias, arc, and ending are no surprise.

The evening’s star was unquestionably Lin Ling-hui (林玲慧), the Taiwanese soprano whose training in Italy paid enormous dividends as Cio-Cio San — her highest-profile performance yet. Her tone was a bit thick at the beginning, but grew and softened as the plot progressed, culminating in a thoroughly persuasive and heartbreaking finale. Zurab Zurabishvili, the Georgian tenor, struggled to soar at times but overall dutifully embodied the caddish Pinkerton as he marries and abandons his Japanese bride. By Act III, he was a bit steadier, while Lin’s high point was probably the iconic Un bel di vedremo aria.

The surrounding cast varied in memorability, from the raving-mad and memorably made-up Bonze (whose face paint and acting were both poured on a bit thick) to the unscrupulous agent Goro (Fernando Wang 王典), and Pinkerton’s confidante Sharpless, the US Consul who officiates the doomed marriage, Tsai Wen-hao (蔡文浩). One standout was Suzuki (Weng Jo-pei 翁若珮), whose tender concern for her mistress’s feelings flowed out through lyrical vocal lines and urgently acted moments of tension. 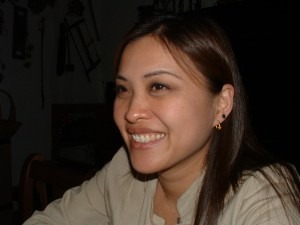 The set itself – a simple platform surrounded on three sides by water with some sliding screens in the back – felt like a quiet character itself. The sharp, clean, unfussy lines conveyed a distinctive and beautiful sense of place, with occasional stunning moments like candles floating on the water’s surface. But the simplicity ultimately serve the drama, bringing Cio-Cio San’s naively misplaced faith and ultimate crushing betrayal into sharp relief. While this was not a flawless Butterfly, the standing ovation was well-deserved.