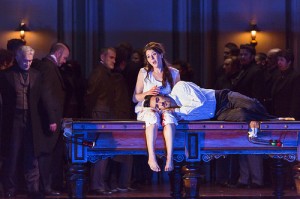 When the Royal Opera House premièred Katie Mitchell’s production of Donizetti’s Lucia di Lammermoor in spring 2016, the management posted numerous warnings about the on-stage sex and violence. Few contemporary directors, not even the provocative exponents of the more ambitious German Regietheater, would put their Lucia through explicit scenes of morning sickness over a toilet bowl, a kinky sex scene ending in a stabbing murder, and a final suicide in a filled bathtub with running water that eventually spills out onto the stage. And few singers could act this out with credibility, all the while meeting the role’s enormous vocal demands. It seemed tailor made for German diva Diana Damrau; so much so, that critics wondered how anyone else could follow that act.

The young Cuban American soprano Lisette Oropesa, giving her debut at the Royal Opera House, grabbed this role with all dramaturgical and vocal challenges and claimed it for herself. This lithe vegan marathon-running soprano deftly dispatched astounding top notes, thrilling coloraturas and most remarkable and varied trills. Her “Regnava nel silenzio” was rapturous, her mad scene was chilling. She is also an attractive, believable and vulnerable heroine in her descent from strong independent woman to a mobbed and broken bride gone insane. 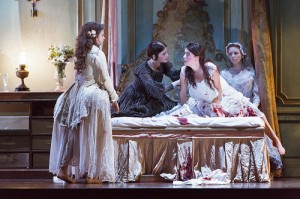 The split stage set, criticized by many for cramping the stage into two smaller and distinct sets, worked wonders, bringing the production jarring intimacy along with explicit back story. Here we see how a gory miscarriage explains Lucia’s mental breakdown. We witness her plotting and executing the assassination of her husband in their wedding bed, something that more standard productions would just let the text relay, rendering her relationship with co-conspirator Alisa (Rachael Lloyd) suddenly important and meaningful. The direction and Victorian era set provided the opera with a tangible and flowing narrative that was cinematic in its imagery, penetrating in its significance and ultimately shattering in its impact.

Oropesa was effectively counterpointed by her dastardly brother Enrico Ashton, sung with force and conviction by Christopher Maltmann. His thunderous baritone made blood curdle all the way up to the rafters. Charles Castronovo, a survivor from the 2016 original cast, portrayed a sweet and passionate Edgardo of Ravenswood, delivering a smooth lyrical tenor with the ability to blade through the noise – even of a running bath tub. His third act “Tu che a Dio spiegasti l’ali” was touching in its intimacy. Smaller roles were well cast, above all Michele Pertusi as the chaplain Raimond Bidebent, and Jette Parker Young Artist Konu Kim as Lucia’s hapless and short-lived husband Arturo Bucklaw. The chorus, possibly feeling boxed in by the doll sized sets, sounded less convincing than usual. 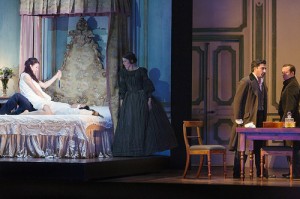 Michele Mariotti, true bel canto royalty as the musical director of Teatro Cummunale di Bologna (which until recently provided the orchestra for the Rossini Opera Festival in Pesaro) and the son of Gianfranco Mariotti, who recently stepped down as the long-serving Sovrintendente of the Rossini Festival, whipped the music ahead without losing any of the nuance of Donizetti’s intricate score.

When opera is this good, it restores one’s faith in the future of the art form.