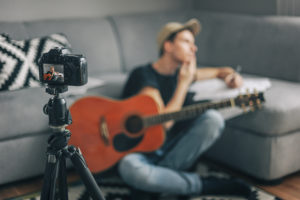 My mother is a phenomenally smart woman – virtually everything she says is correct. Sadly, even after 31 years of listening to her sage advice (read: nagging), I still find myself occasionally having to admit that, yet again, I was stupid not to have listened to her advice. This time, the advice in question is rather self-explanatory: ‘don’t put off things that you should be doing now.’

The manifestation of this advice takes the form of an article that has been brewing in my mind for over a year now – exploring the inherent differences between the live concert experience, and listening to recordings at home.

But then a remarkable thing happened: the whole world shut down. Overnight, the live concert experience became a historical concept – a pastime now stuck in the veritable limbo of the unknown, as we await what our world will look like when the doors eventually re-open.

Within hours of the announcement that the world’s leading concert halls would be shutting down, a plethora of performing musicians scuttled out across the internet, bemoaning the sudden and shocking loss of both income and creative outlet. And amidst the scuttle, came the response: the live-streamed concert on whatever platform, with whatever equipment available, to whatever audience was tuning in. It appears – in the short-term at least – that only 143 years after Edison revolutionised music with the invention of the Phonograph, music has another medium to play on.

Whilst live-streaming is not a new concept (Periscope, Facebook and Instagram Live, etc. have been offering this broadcast option for years; not to mention live sport and news broadcasts for several decades), it has never been utilised for music in such an industry-accepted way. Is it possible to imagine a world where live-streamed concerts are the primary way audiences engage with music performance in the future? And if so, what does this mean for us as musicians moving forward?

Perhaps the answer lies somewhere in the original conception of this article – exploring the relationship of live vs recorded music experience. Whilst several works have been written1 exploring how music and musicians have been affected by this relationship, I became intrigued about the audience perspective at a friend’s concert last year.

This friend – an astonishingly good violinist – was playing a chamber recital (violin + piano duos) in a small concert hall in Berlin. On the programme was one of my all-time favourite works (Olivier Messiaen’s Theme et Variations), alongside some Mozart and Schnittke, finishing with the Sarasate’s Carmen Fantasy – a field-day of fiendishly difficult technical passages accompanying the familiar melodies, that guarantees rapturous applause at the conclusion. And that is exactly what happened: an audience that was barely engaged throughout the more soul-searching and emotion-draining works of Messiaen and Mozart was suddenly brought to life by the sheer virtuosity taking place directly in front of them.

I left the concert wondering what is the cause of this response: specifically, why an audience doesn’t connect as strongly (or as viscerally) with the introspective and intimate music as with the balls-to-the-wall speed machine.

And then I thought about our relationship to recordings: how as a teenager in the early 2000s my generation forged our identities on mixed tapes, burned CDs, MP3 folders, iTunes Playlists, and now Spotify playlists – and considering our generic taste as teens is rather woeful, our listening practices were generally confined to headphones in a Walk/DiscMan, or in tiny boomboxes in our respective rooms. Our recorded musical choices became our refuge.

If this rather simplistic explanation is to be accepted, then it can be argued that recorded music represents for listeners now a safe space to engage in all of our emotional, personal, down-time needs. But by virtue of the privacy it offers, has it by contrast left the live concert experience as an inferior option to access these same emotions?

Maybe not – I still fall apart in tears at the occasional concert (damn you, Liebestod). But then, perhaps it is our natural attraction to quality that allows the live experience endure. Put simply, nothing is better than seeing a virtuoso violinist performing Paganini, or a jazz heavy losing themselves in an improvised solo, or lead-guitarist shredding a famous riff on stage. To see Beyoncé or Boris Giltburg live is to marvel that a mere mortal can actually achieve what they have: it is being in the presence of greatness itself. It is being present, riding the waves of risk with the performer, experiencing vicariously the emotional journey they take the collective audience on.

And what of live-streaming then? Is it in essence the lovechild of the live and recorded experience? For sure, it combines the two aspects of presence and privacy through its very nature. We are present for performance in real-time, yet we experience it through the privacy of our own home/devices.

If viewed through this narrow prism, it is clear that the potential benefits of developing this medium have barely been discovered. Tech-sceptics will rage against the idea, suggesting that the atmosphere of a live performance can never be duplicated digitally. And they are probably right to an extent: but to engage in this sort of thinking is to ignore the fact that new technology never seeks to merely replace its predecessor – instead, it changes the entire dynamic of the medium it serves.

Just as the grand piano relegated the harpsichord to obscurity, and recorded music virtually killed the concept of amateur music-making (at least the 19th century version), live-streaming promises/threatens to upend our relationship to performance – recorded, live, or streamed – of music. Right now it may be a grainy picture with terrible quality audio, but then again the first recordings were grainy tinfoil sheets wrapped around a cylinder powered by a lever – it won’t stay an inferior listening method for long.

What we have is an unprecedented and unexpected scenario, which promises an uncertain future. What we cannot do is ignore the potential of this newly embraced medium, and all it can offer us. Perhaps in three weeks we’ll all be allowed out, and cultural institutions will receive a boost of interest from those locked up now watching on their inferior screens. But until then, I suggest we spend those three weeks – or months – thinking about how we can utilise this new medium to take our art form further.